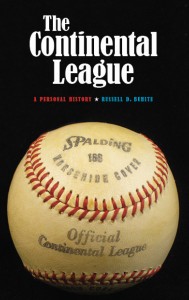 Before he became an author and a history professor, Dr. Russell D. Buhite was a minor league first baseman and outfielder for the New York Giants, the Baltimore Orioles and the Washington Senators.

In 1960, Buhite, a professor emeritus of history and political science at Missouri University of Science and Technology, signed a contract with the newly formed Continental League. He writes of his experiences and of the history of the ill-fated league in his latest book, “The Continental League, A Personal History.” The book was published this month by the University of Nebraska Press.

Part memoir and part history, Buhite’s book details the origin, development and eventual undoing of the Continental League from an insider’s point of view.

“A group of wealthy team owners in several cities without major league baseball, and in New York, which had lost the Giants and Dodgers to the West Coast, decided that the best way to expand major league baseball, which many people thought necessary, was with a third league,” Buhite says. “At first the National League and American League owners and the commissioner agreed, but then they worked very hard to undercut the new league.”

They succeeded in undercutting the league in the summer of 1960 by agreeing to expand the National League and the American League to other cities, Buhite says.

According to Buhite, the Continental League, championed by baseball legend Branch Rickey, was based on an innovative approach to evaluating and developing talent and offered a new economic model for baseball. The last serious attempt to form a third major league, the Continental League played a significant role in building a thriving minor league and forced the expansion of major league baseball.

Buhite is the author of 11 previous books and numerous articles on American foreign policy. His most recent book, “Douglas MacArthur: Statecraft and Stagecraft in America’s East Asian Policy,” was published in 2008.

On May 20, 2014. Posted in Academics & Faculty, Arts & Humanities, Department of History and Political Science, Featured, News