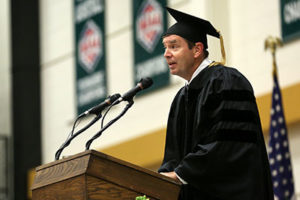 Jeff Steinhart, retired vice president of engineering and environmental affairs for Anheuser-Busch Inc. and a 1979 engineering management graduate of Missouri S&T, delivered the May 2014 commencement address.

Measure your success by your own values, not by how others view you, Jeff Steinhart told graduates of Missouri University of Science and Technology during commencement ceremonies at Missouri S&T on Friday, May 16, and Saturday, May 17.

In his commencement address, Steinhart, retired vice president of engineering and environmental affairs for Anheuser-Busch Inc. and a 1979 engineering management graduate of Missouri S&T, discussed his career and shared some of the key principles he learned as a student that allowed him to advance.

“Ask questions, listen to the answers, seek out a mentor, gain people’s respect and be action-oriented versus passive,” Steinhart told the graduates. “Remember, each of you is responsible for taking the necessary actions to advance your careers.

“Today’s graduation is a transition point into the next chapter in your lives,” Steinhart said. “It is important to understand that what you have learned to date has equipped you to move into the various career paths in the workplace where you are headed, but your business and technical knowledge will continue growing throughout your career.”

During commencement, Steinhart was awarded the doctor of engineering, honoris causa. He also holds a master of business administration degree from Southern Illinois University.

In 1982, Steinhart joined Anheuser-Busch, where he worked in the corporate engineering organization for the next 28 years. In 2000, he was promoted to the position of vice president of engineering and environmental affairs for Anheuser-Busch.

As vice president, he led the company’s global engineering mission to deliver unparalleled engineering and environmental services to its customers through innovation, continuous improvement and cost-effective solutions. He built global engineering partnerships with peer companies that allowed Anheuser-Busch to share best practices and improve global expansion capabilities. He also led the design and execution for domestic and international capital projects totaling nearly $700 million annually and managed the company’s commitment to environmental excellence.

Steinhart retired from Anheuser-Busch in 2009. In 2003, Missouri S&T awarded Steinhart with a professional degree in engineering management. In 2007, he was named an Honorary Knight of St. Patrick and received the Miner Alumni Association’s Alumni Merit Award for his service to Missouri S&T. A current member and past president of the Missouri S&T Board of Trustees, Steinhart is president of the Academy of Engineering Management and a member of the Order of the Golden Shillelagh donor recognition society and Tau Kappa Epsilon fraternity.

On May 17, 2014. Posted in Engineering Management and Systems Engineering, Featured, News, People