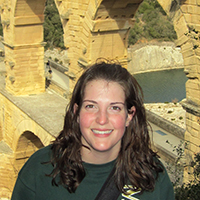 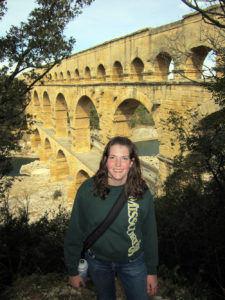 Senior Julie Langenfeld visited the Roman aqueducts while studying in France in 2012.

Julie K. Langenfeld, a senior in geological engineering with a minor in French from Cape Girardeau, Mo., received a 2014 Outstanding Senior in French Award from the American Association of Teachers of French.

The annual award is given to a graduating senior who has demonstrated excellence in the study of French as well as exceptional commitment to the language and the cultures where it is spoken. Recipients must have completed at least three years of French study at the time of graduation and be non-native speakers of the language.

Langenfeld has studied French for four years and spent the spring 2012 semester in Vichy, France, through the university’s study abroad program, where she studied the European Union, French and intercultural communication. A member and officer of the Missouri S&T French Club, Langenfeld is a student of Dr. Audra Merfeld-Langston, assistant professor of French at Missouri S&T.

On April 16, 2014. Posted in Department of Arts, Languages and Philosophy, Geological Sciences and Engineering, People