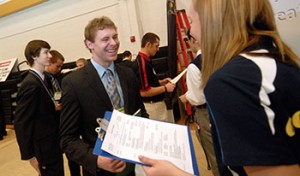 Hundreds of employers flock to Missouri S&T to hire some of the nation’s best students at top salaries.

According to a new report from PayScale, Missouri University of Science and Technology is among the nation’s leading universities in terms of providing a high return on investment.

Among all universities, public and private, Missouri S&T ranks 20th on the PayScale list.