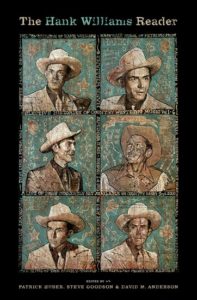 Since Hank Williams’ New Year’s Day death in 1953, journalists, biographers, historians and scholars have written extensively about the country music legend. A new book co-edited by a Missouri University of Science and Technology historian compiles much of this work and examines Williams’ place in American history and popular culture.

The Hank Williams Reader, co-edited by Dr. Patrick Huber, professor of history at Missouri S&T, will be released by Oxford University Press on Feb. 28. Part of Oxford’s Readers on American Musicians series, the book includes a collection of more than 60 compelling and historically significant writings about Williams, organized in a chronological order that categorizes major interpretations of Williams’ life and legacy. Each entry features headnotes that detail its background and significance.

The book includes articles from newspapers, tabloids, and entertainment trade journals, a scene from the screenplay for the 1964 biographical film “Your Cheatin’ Heart,” fan writing, reviews of his music, excerpts from novels and several hard-to-find articles that have never been reprinted.

“We wanted to show the diversity of writing that exists about Hank Williams,” Huber says. “The kinds and numbers of people writing about him have increased over the years. After he died, others outside the music industry, like scholars and historians, began writing about him, too. This book shows readers how his reputation evolved over the years.”

Huber has been a fan of Williams for more than 20 years.

“Hank Williams wrote high-caliber songs that are now considered timeless,” Huber says. “He was an electrifying performer and you can still hear that in his music. Even today, he continues to attract interest because his rags-to-riches rise to fame and then self-destruction fascinates people. Add in the mystery surrounding his death and it combines to make him a compelling figure.

“As one biographer wrote, Williams is a blank slate. We can interpret him as we wish.”

Huber is the author of the award-winning Linthead Stomp: The Creation of Country Music in the Piedmont South and three other books. He holds a Ph.D. from the University of North Carolina-Chapel Hill. In 2000 he began teaching in the history and political science department at Missouri S&T, where he specializes in Missouri history, the American South and 20th century U.S. history.