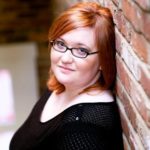 Amy Jones is a 2008 electrical engineering graduate and one of the 2014 New Faces of Engineering.

Amy K. Jones, a product engineer with John Deere in Dubuque, Iowa, and a 2008 graduate of Missouri University of Science and Technology, is one of 13 young engineers to be honored as the New Faces of Engineering by DiscoverE and TE Connectivity.

Jones and the other awardees were announced today (Thursday, Feb. 20) and recognized in USA Today. The announcement coincides with Engineers Week, which takes place Feb. 16-22.

The New Faces of Engineering program is part of Engineers Week 2014 activities and recognizes young engineers under the age of 30 for their early accomplishments. Each year, members of professional engineering societies nominate members for the honor. Jones was selected as the IEEE-USA awardee. She was nominated by Dr. Steve E. Watkins, professor of electrical and computer engineering at Missouri S&T.

Jones holds a bachelor of science degree in electrical engineering from Missouri S&T. She leads the John Deere team responsible for the first complete embedded software development process on a construction product line.

At John Deere, she advanced to technical leadership quickly and makes broad contributions including activity as an inventor and as a company recruiter. A dedicated volunteer, Jones devotes herself to pre-college outreach, organizing events and programs like MathCOUNTS and FIRST Lego League.

DiscoverE is a foundation that works with volunteers and more than 100 professional societies, corporations and government to promote Engineers Week and introduce pre-college students to engineering.