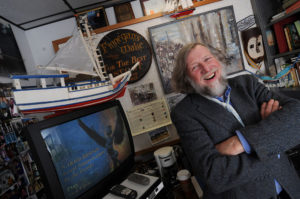 A carnival that has celebrated Independence Day in Rolla, Mo., for nearly 80 years is the subject of Carnival, Man, a documentary that will premiere at Missouri University of Science and Technology as part of the campus’s 2014 Free Spring Film Festival.

The film and two others will be screened at 7 p.m. Tuesday, Feb. 18, in Leach Theatre of Missouri S&T’s Castleman Hall, 10th and Main streets in Rolla. The film festival is free and open to the public.

“For years I have said that the Lions Club Carnival was a whole lot like being in a Fellini film and I wanted to film the event just to find out what would happen,” says Bogan.

Aided by cameraman Ryan Wylie, Bogan shot two hours of digital footage during a 7-hour exploration of the 2012 carnival, which was held in 103 degree heat.

“We edited that down to 30 minutes,” Bogan says, “and the result is an impressionistic tour of rides, games, people and fireworks.

“Half the fun of the carnival is bumping into friends from decades ago,” he says. “I am especially fond of the Ferris wheel and include a meditative montage of that experience.”

In addition to Carnival, Man, another of Bogan’s documentaries, Man vs. Tree, will be shown in the program, along with Buster Keaton’s silent comedy Sherlock, Jr. There will also be door prizes at the event.

“My hope is that Carnival, Man catches the spirit of a unique Ozark event that will speak to an audience inside and beyond Phelps County,” says Bogan.