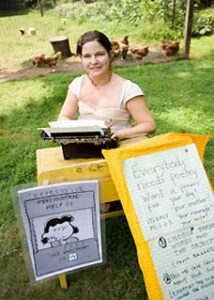 Poet Charlotte Matthews has joined the Missouri University of Science and Technology faculty this spring as the 2014 Maxwell C. Weiner Distinguished Professor of Humanities. She will present a poetry reading at 7 p.m. Tuesday, Jan. 28, in the Southwestern Bell Culture Center, 1207 N. Elm. St., in Rolla. The event is open to the public.A professor in the Bachelor of Interdisciplinary Studies Program at the University of Virginia, Matthews is teaching a course in poetry writing in the English and technical communication department at Missouri S&T this semester.

Her poetry has appeared in numerous poetry magazines and two collections, Green Stars and Still Enough to Be Dreaming, were published by Iris Press in 2006 and 2008, respectively.

Missouri S&T’s Maxwell C. Weiner Distinguished Professorship in Humanities, established by an estate gift to the university in 1999, is rotated among S&T’s arts, languages and philosophy department, the English and technical communication department, and the history and political science department.