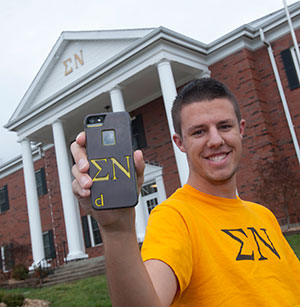 In just a few months, iPhone-loving college students who want to show off their fraternity or sorority pride may have a new way to do so, thanks to two college students from Chesterfield, Mo., and the business they started last summer. 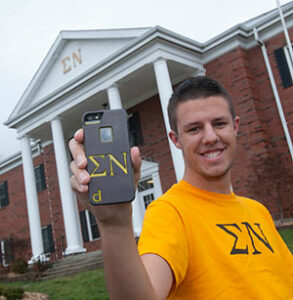 Connor Wolk, a sophomore at Missouri S&T, and Taylor Jay, a freshman at the University of Kansas, recently launched their business, Dual Cases LLC. They plan to make lightweight yet sturdy iPhone cases that can be customized to include the Greek letters of a customer’s favorite fraternity or sorority.


The idea for Dual Cases LLC was born in the summer of 2012, while Wolk and Jay were both working as interns for VMH International in their hometown of Chesterfield.

“We both had iPhones, and we talked about how all the cases (on the market) added a lot of bulk,” Wolk says.

So they came up with a two-layered case design – that’s the “dual” in the name Dual Cases. Wolk’s prototype, which he uses to protect his own phone, consists of a shock-absorbent rubber inner layer and a black plastic outer layer. The case is flush with an iPhone’s screen and fits snug against the phone’s beveled corners, or chamfers.

“It’s minimalistic, but it’s also modern and cool,” Wolk says. “We wanted to retain the beauty of the iPhone but provide two layers of protection – two layers of defense in case you drop your phone.”

Engraved in back of Wolk’s prototype are the letters of his fraternity, Sigma Nu. He and Jay plan to market the cover to fraternities, sororities and other Greek-letter organizations, such as honor societies.

“This is a differentiating factor that has brought us to a niche market,” Wolk says. “People love to represent their fraternities and sororities. What better way than with their iPhones?”

Wolk and Jay founded their company last July. Wolk is the CEO and Jay is the chief technical officer.

In September, Wolk plugged his business idea at the Missouri Tech Expo Elevator Pitch Competition in Columbia. The event was sponsored by CLIMB (Collaboration – Leadership – Innovation for Missouri Business), a student entrepreneurship club at the University of Missouri-Columbia.

“You have five minutes to pitch your idea, then two minutes for Q&A,” Wolk says.

He won second place at that event, and $750 toward his fledgling business. He also won second place and $1,000 at another CLIMB event, held Nov. 7. Wolk invested that money in designing and developing a website and printing business cards while continuing his quest for further funding. He and Jay also created a presence on Twitter (@dualcases) and Facebook (www.facebook.com/dualcasesusa).

“I have an official business address for my business cards, access to office space, supplies, printing, computers and other support,” Wolk says.

To gain access to the Student Business Incubator, Wolk had to submit a business plan, which the TDC staff reviewed and vetted. All of the companies in the incubator are expected to “graduate” into a full-fledged business within three years.

Wolk doesn’t anticipate it will take that long. He hopes to be in production with Dual Cases products by next spring.

When not busy getting his company off the ground, Wolk is also the secretary of the S&T student entrepreneurship organization TIES (Technical Innovators and Entrepreneurs Society) and is active in his fraternity. Last year, he also founded a different type of venture, the S&T Photography Club.