‘The Curious Savage’ to be performed at Leach Theatre 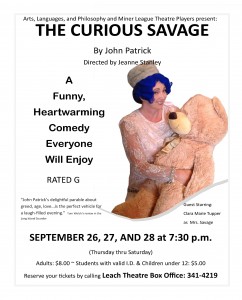 The Miner League Theater Players, Missouri University of Science and Technology’s student theater group, will present the acclaimed comedy “The Curious Savage” in three performances on campus in September.

“The Curious Savage,” a comedy by John Patrick, tells the story of Ethel P. Savage, a woman whose husband recently died and left her $10 million, and her desire to give her late husband’s money away. Performances will be held at 7:30 p.m. Thursday, Sept. 26; Friday, Sept. 27; and Saturday, Sept. 28. All three shows will be performed in Leach Theatre of Castleman Hall, 10th and Main streets in Rolla. This comedy is rated G for general audiences.

Tickets are $8 for general public and $5 for students of S&T with a valid campus I.D. Tickets may be purchased online at leachtheatre.mst.edu or from the Leach Theatre Box Office, located in the vestibule inside the main entrance to Leach Theatre, facing 10th Street. Box office hours are 9 a.m. to 4 p.m. Monday through Friday.

“The play takes place in ‘The Cloisters’ a sanitarium for rich mental patients,” explains Jeanne Stanley, an assistant professor of arts, languages and philosophy at S&T. “While there, Mrs. Savage befriends some extraordinary guests, and together they manage to save the day. The play is great fun, with many twists and laughs.”

The following S&T students are part of the cast for “The Curious Savage:”

Alyssa Bennett, a freshman in engineering from Imperial, Mo., will portray Miss Willie.

Zach La Rue, a senior in psychology from Chanute, Kan., will portray Titus.

Katie Payne, a senior in biological sciences from Steelville, Mo., will portray Fairy May.

Daniel Sloan, a sophomore in engineering from Cameron, Mo., will portray Dr. Emmett.

Chayne Standage, a freshman in engineering from Springfield, Mo., will portray Jeff.

The following Rolla community members are part of the cast for “The Curious Savage:”

Clara Marie Tupper of Rolla will portray as Mrs. Savage.

Paula DeLong, compliance officer in the office of sponsored programs at S&T, will portray Lily Belle.

Wendy King of Rolla, a 2010 history graduate of Missouri S&T and the drama teacher at Rolla High School, will portray Florence.