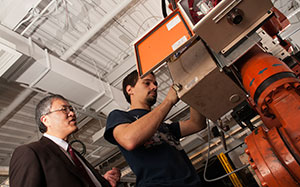 Aided by funding from NASA and using methods similar to 3-D printing, researchers at Missouri University of Science and Technology are running computer simulations of processes that could lead to stronger, more durable materials for the space agency.

The Missouri S&T researchers also plan to fabricate some of these new materials soon, says Dr. Frank Liou, director of the university’s Laser Aided Manufacturing Process (LAMP) Laboratory and the Michael and Joyce Bytnar Professor of Product Innovation and Creativity.

For the past 15 years, Liou and his colleagues have been developing a fabrication method known as additive manufacturing. The process involves the use of high-powered lasers to melt small particles of powdered materials as they exit a nozzle to create three-dimensional shapes, layer by layer. The technique is similar to 3-D printing, which has grown in popularity in recent years.

According to Liou, the additive approach applies to a broad range of manufacturing – from the fabrication of large aircraft components to minuscule biomaterials used in surgical procedures. Some of Liou’s students who enjoy fishing even joke about using LAMP’s additive manufacturing tools to make a canoe, layer by layer.

Additive manufacturing approaches result in a denser, stronger material than conventional methods, such as milling, machining or forging of metals. Liou, who also directs Missouri S&T’s manufacturing engineering program, says steel parts made using the additive method are 10 percent stronger than steel that is machined.

In his latest research, Liou is combining additive manufacturing with more conventional approaches to creating materials. He calls the approach “hybrid manufacturing.”

Liou has received about $660,000 from NASA to develop computer models of various additive manufacturing approaches. He believes the models will lead to a greater understanding of how layered materials adhere, or bond, to the surface on which they are deposited.

“In many aerospace or biomedical applications, you cannot afford metal fatigue,” or cracking of the material, Liou says. “It is important to understand how well a deposited metal bonds to the surface.”

Liou recently received another $750,000 from NASA to support the next step of this research: the fabrication of new materials not generally observed in nature. The research could lead to stronger metals as well as a way to repair expensive components instead of scrapping them, Liou says.

“Some dies or molds could cost a quarter of a million dollars to replace,” Liou says.