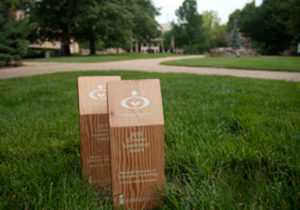 The Green Campus Committee at Missouri S&T invites the Rolla community to an ice cream social on campus to celebrate the university’s designation as a 2013 Climate Leadership Award winner.

The ice cream social will be held from 3 to 4 p.m. Friday, June 21, on the campus mall. The event is free and open to the public. Members of Missouri S&T’s Green Campus Committee will serve ice cream cones to those in attendance, and information regarding Missouri S&T’s environmental initiatives will also be on display during the event.

Missouri S&T was one of 20 Climate Leadership Award finalists. The award is presented annually to colleges and universities whose leaders have signed the American College & University Presidents’ Climate Commitment. Winners also must demonstrate innovative and advanced leadership in education for sustainability and climate mitigation and adaption, says David Hales, president of Second Nature, a non-profit organization that promotes sustainability in higher education.

Missouri S&T was recognized on June 5 for its sustainability efforts, and for two initiatives in particular:

“We are honored to receive this national recognition for what we believe are very pragmatic yet bold approaches to sustainability,” says Missouri S&T Chancellor Cheryl B. Schrader. “Our Solar Village is the only neighborhood of its kind on any university campus, and it demonstrates the feasibility of green, low-impact living while highlighting the creativity of the students who designed and built those homes.

“Our geothermal energy system is one of the most comprehensive to be undertaken on a university campus,” Schrader adds. “I believe it too will become a model for other institutions to emulate.”

In April, Missouri S&T also won a video contest sponsored by Second Nature in conjunction with the Climate Leadership Awards. The month-long contest featured videos about the sustainability initiatives of all CLA finalists. Missouri S&T’s video focused on the Solar Village and the geothermal energy project.

Final winners of the Climate Leadership Awards were chosen by members of the Second Nature Board of Directors unaffiliated with ACUPCC signatory schools.