Barbara Hale is S&T’s Woman of the Year 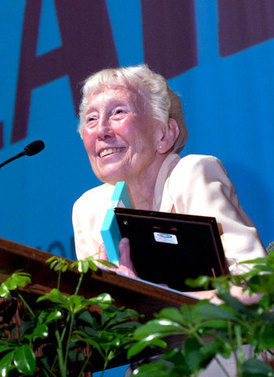 Dr. Barbara Hale, professor of physics at Missouri University of Science and Technology, has been named 2013 Woman of the Year by Missouri S&T. She was honored during a campus ceremony on Wednesday, April 17.

The Woman of the Year award is given annually in recognition of efforts to improve the campus environment for women and minorities. As part of the award, Hale received a $2,000 stipend funded by Missouri S&T graduate Cynthia Tang, founder and former chair of Insight Industries Inc.

“Dr. Hale is an outstanding educator,” wrote one of her nominators. “She has been an outspoken advocate for the faculty and for her students.” The nominator also noted that Dr. Hale has received both the Faculty Excellence Award and the Outstanding Teacher Award numerous times.

Hale, a senior investigator in the Cloud and Aerosol Science Laboratory at Missouri S&T, also serves as the personal advisor for Chi Omega sorority, a position she has held since the chapter’s founding in 1979.

“Dr. Hale understands the meaning of ‘advisor,’ which is something we appreciate as young women learning to make decisions that not only affect ourselves, but our sisters and future Chi Omegas,” wrote another nominator. “Dr. Hale builds a close relationship with each member of the chapter. Each and every week she brings forth ideas filled with wisdom and experience for our chapter and everyday lives.”

On April 17, 2013. Posted in Department of Physics, People, University News