Dr. Stewart Gillies, interim director of the Rock Mechanics and Explosives Research Center at Missouri University of Science and Technology since 2009, has been named director of the center, effective Jan. 1, 2013. 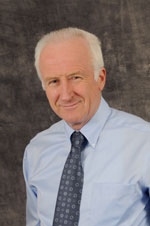 “Dr. Gillies provided the needed leadership and worked well with the center research investigators to refocus the center to better address emerging areas and take full advantage of funding opportunities during his service as interim director,” says Dr. K. Krishnamurthy, vice provost for research and sponsored programs. “His leadership skills in industry and university settings, combined with his broad experience in mining engineering consulting and research, make him the right candidate to lead this major interdisciplinary research center at S&T.”

“I’m very proud to be appointed as director of the center,” Gillies says. “University-based research such as that undertaken at Missouri S&T’s Rock Mechanics and Explosives Research Center allows research investigator faculty from different backgrounds to work together and bring out the best from an interdisciplinary viewpoint. We have access to facilities such as specialist laboratories, explosion testing chambers, the Missouri S&T Nuclear Reactor and the Experimental Mine. We work with many engineers and scientists across the country at industry-based petroleum facilities, mine sites, geological occurrences and locations where nuclear engineering issues are important.”

Gillies is also the Union Pacific-Rocky Mountain Energy Mining Professor at Missouri S&T. He was named interim director of the RMERC on June 1, 2009, succeeding Dr. David A. Summers, Curators’ Professor Emeritus of mining and nuclear engineering at Missouri S&T. Summers served in the position for more than 30 years.

Prior to joining Missouri S&T, Gillies was director of Gillies Wu Mining Technology, a consulting and training firm based in Brisbane, Australia. The firm focuses on underground mining issues, mine ventilation and atmosphere control, emergency evacuation, mine evaluation economics, and training and education.

Gillies has extensive experience as a consulting to the mining industry in mining engineering, mine ventilation and mine evaluation economics. He was an assistant professor of mining engineering at Missouri S&T from 1978 through 1982, then held faculty positions at the University of New South Wales and the University of Queensland, both in Australia, before returning to Missouri S&T in 2008.

A principal researcher on more than 25 industry-funded research grants on mine ventilation and mine economics issues, Gillies has worked closely with international groups, including the National Institute of Occupational Safety and Health in Pittsburgh, Pa., the Polish Academy of Sciences in Krakow, Poland, and the Australian Coal Association Research Program in Brisbane. He has authored or co-authored more than 200 technical publications, reviewed journals, conference proceedings and technical reports and has delivered more than 100 technical presentations to various academic, government and industry audiences and has led presentation of more than 40 short courses to industry participants.

Gillies’ current research projects include the utilization of booster fans in underground coal mines and fire simulation for training in self-escape in underground mines.