Family musical glows in the dark at Leach Theatre

Colorful puppet sea creatures in John Tartaglia’s glow in the dark musical ImaginOcean will soon illuminate the Leach Theatre stage at Missouri University of Science and Technology. A part of this season’s Leach Theatre Family Series, the performance will be held at 6 p.m. Wednesday, Oct. 24, in Leach Theatre of Castleman Hall, 10th and Main streets in Rolla, Mo. 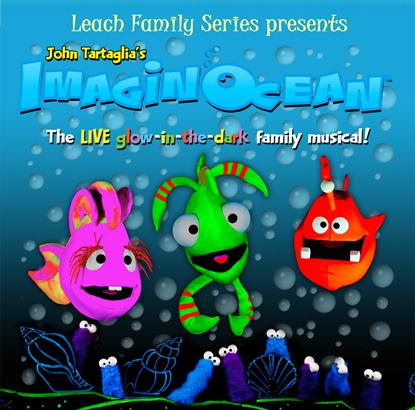 Tony Award nominee Tartaglia created the one-of-a-kind live black-light puppet show ImaginOcean and set it to a score of swing, rhythm and blues, and big band music. His credits include Avenue Q, and Shrek The Musical on Broadway, and Disney’s Beauty and the Beast. He also created and starred in The Playhouse Disney series “Johnny and the Sprites.”

Tickets are $12 for adults and $10 for students and youth. Tickets are available online or from the Leach Theatre Box Office, located in the vestibule inside the main entrance to Leach Theatre, facing 10th Street. Box office hours are 9 a.m. to 4 p.m. Monday through Friday. Call 573-341-4219 for more information.

The Leach Family Series offers discounts for purchases of four or more tickets to this performance.