For most of the past decade, Dr. Wan Yang has spent his summers in the Bogda Mountains in northwest China, collecting rock samples that predate dinosaurs by millions of years in an effort to better understand the history of the earth’s climate and perhaps gain clues about future climate change. 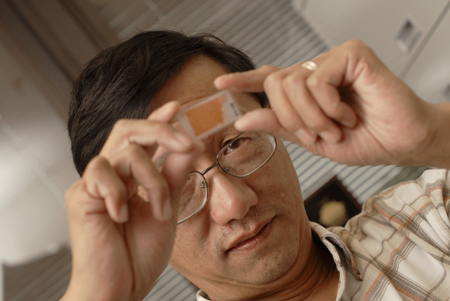 Dr. Wan Yang examines rock samples that predate dinosaurs by millions of years in an effort to better understand the history of the earth’s climate.

“The formation of rocks has everything to do with climate,” says the associate professor of geological sciences and engineering at Missouri University of Science and Technology. “Different climate settings have different sediments, soil types and vegetation. The beauty of the geological record is that we can see changes in the past, which gives us some guide to predict future changes.”

Yang spends his summers working in northwest China because it’s one of the few places to have a land record from Pangea, the supercontinent that existed between 200 million and 350 million years ago. Land records are hard to preserve because they are exposed to the elements, Yang says, so most research has typically been done using marine records instead. The seawater offers better protection of the rocks below, as Missouri S&T students saw first-hand in June during a field course led by Yang and two other professors from Trinity and Guizhou universities in southern China.

After the field course was complete, Yang, along with two Missouri S&T graduate students and collaborators from Chinese institutes, spent six weeks camping and hiking in the high desert, where temperatures averaged between 100 and 120 degrees. The team was surprised to uncover a complete, fossil skeleton of a vertebrate animal while working to collect their samples. The two-foot long skeleton was later covered to protect it from being exposed to the elements.

“Most people don’t realize that 250 million years ago, the greatest, most severe mass extinction in the earth’s history occurred,” Yang says. “That’s when the earth’s climate shifted from icehouse to greenhouse. There are a lot of theories, but we don’t know the real causes of the mass extinction yet.”

Yang returned to Rolla in early August with more than 300 pounds of volcanic ash (known as tuff). Zircon, a special mineral in the ash, can be used to accurately date the rocks and will help to more precisely determine the pace of the terrestrial mass extinction and climatic change, he says.

“There are so many things we would like to know,” he says. 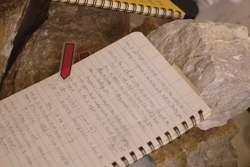 What is known is that after remaining in a greenhouse state for about 230 million years, the earth transitioned back to an icehouse climate roughly 30 million years ago. Since then, the earth’s climate has cycled between glacial and interglacial periods. For example, 18,000 years ago there were glaciers just north of Kansas City, Mo., he says.

“For the last 6,000 years, we’ve been in an interglacial period,” he says. “The climate has been warm but it’s within natural variations. We’ve seen more extreme ones and theoretically, it’s time to go glacial,” Yang says.

Yang plans to return to northwest China on a regular basis throughout his career to conduct more detailed studies in a wider area.