Antioxidant may prevent, even cure, cataracts and other degenerative eye disorders

Researchers at Missouri University of Science and Technology are working with an antioxidant that could prevent or cure cataracts, macular degeneration and other degenerative eye disorders. 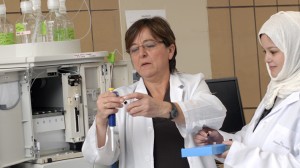 Dr. Nuran Ercal (left) recently received a grant to fund the use of an antioxidant to prevent degenerative eye conditions. Photo by B.A. Rupert

The research group, headed by Dr. Nuran Ercal, the Richard K. Vitek/Foundation for Chemical Research Endowed Chair in Biochemistry at Missouri S&T, is studying eye drops prepared with the antioxidant N-acetylcysteine amide (NACA) as a treatment for these eye conditions.

Ercal says NACA is an improvement over another experimental treatment, the antioxidant N-acetylcysteine (NAC), because it passes more easily across cell membranes, allowing the medication to be used in lower doses.

“NACA’s characteristics as a drug were improved over NAC by neutralizing the carboxylic group of NAC, which makes the NACA pass cellular membranes easily,” says Ercal. “And because NACA can be administered at a lower dose, the drug has a greater therapeutic index and lowers the risk of side effects traditionally associated with NAC.

“NACA is also an excellent source of glutathione, a cell’s main antioxidant power, which is diminished during degenerative eye disorders,” she adds.

Vision loss from age-related eye disorders affects more than 30 million people in the United States and is expected to double in the coming decades, Ercal says.

In addition, more than $9 billion is spent annually in the U.S. on cataract surgery alone. The total annual cost of all services related to vision problems exceeds $20 billion, she says.

“NACA eye drops could drastically reduce these costs and represent an alternative to costly surgery, while greatly improving the quality of life for those afflicted,” says Ercal.

Ercal and her team have been testing NACA on HIV-related problems, lead poisoning and other toxicities for 10 years. About four years ago they began testing it on eye disorders. 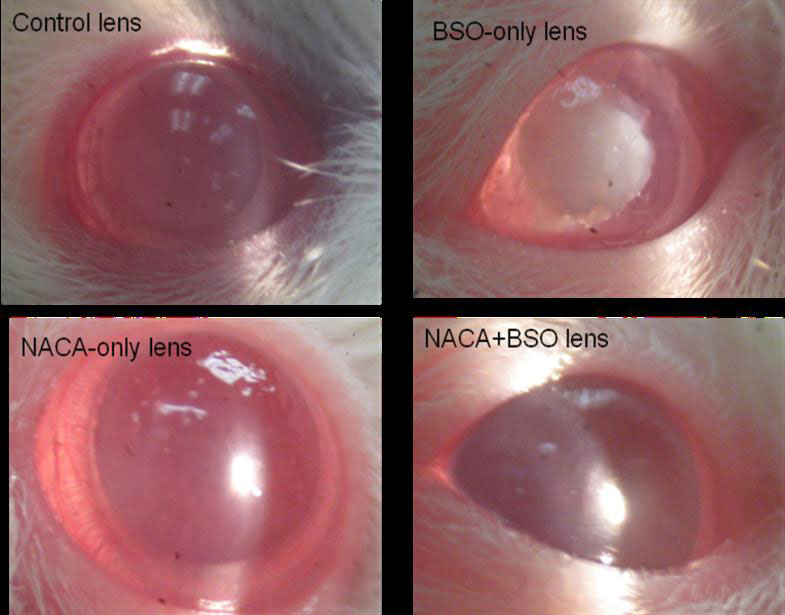 Cataract formation in rats. Top left (control lens): The lenses in this group were found to contain no detectable cataracts. Top right (BSO-only lens): All lenses in this group developed very distinct cataracts, with most being nearly completely opaque. Bottom left (NACA-only lens): Results similar to those in the control group were obtained, with no detectable signs of cataract formation. Bottom right (NACA+BSO lens): The lens depicted has a Grade 1 opacity which was evident by the amount of scattering light.

Ercal recently received a $378,000 three-year research grant from the National Eye Institute of the National Institutes of Health. The preliminary data submitted for the funding was based on research by her former Ph.D. student, Joshua Carey.

Carey’s dissertation involved preliminary studies of the effects of NACA to slow down cataract growth on rats that had been given L-buthionine-S,R-sulfoximine (BSO), a solution that causes cataracts to form. “The NACA solution prevented cataracts from forming,” says Ercal. “Our research will build on Josh’s research, to see if NACA can actually reverse the degeneration as well.”

Ercal, who is also an M.D., says further testing will help establish appropriate dosage and frequency, as well as possible side effects and other factors. She says successful results using animal subjects may eventually support the viability of human usage.

Ercal works closely with Dr. Shakila Tobwala, a post-doctoral fellow in Missouri S&T’s chemistry department. Others in the research group include the grant’s co-investigator, Dr. Humeyra Karacal from the ophthalmology department at Washington University in St. Louis, and Missouri S&T graduate and undergraduate students.

5 thoughts on “Antioxidant may prevent, even cure, cataracts and other degenerative eye disorders”