When viewing a website, it takes users less than two-tenths of a second to form a first impression, according to recent eye-tracking research conducted at Missouri University of Science and Technology. But it takes a little longer – about 2.6 seconds – for a user’s eyes to land on that area of a website that most influences their first impression. 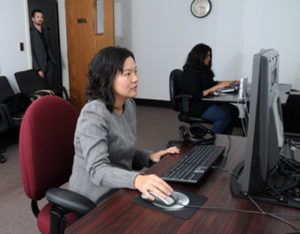 “We know first impressions are very important,” says Dr. Hong Sheng, assistant professor of business and information technology at Missouri S&T. “As more people use the Internet to search for information, a user’s first impressions of a website can determine whether that user forms a favorable or unfavorable view of that organization.”

Sheng’s research with Sirjana Dahal, who received her graduate degree from Missouri S&T last December, could also help web designers understand which elements of a website’s design are most important for users.

For their research, Sheng and Dahal enlisted 20 Missouri S&T students to view screenshots, or static images, of the main websites from 25 law schools in the U.S. The researchers chose law schools because that degree is not offered at Missouri S&T, so students would not compare those degree programs with one offered at their own campus.

“We wanted to show them sites that were relevant to them but not familiar to them,” says Sheng, whose research specialty is human-computer interaction. 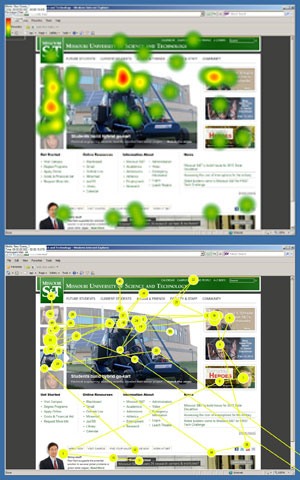 Using eye-tracking software and an infrared camera in Missouri S&T’s Laboratory for Information Technology Evaluation, the researchers monitored students’ eye movements as they scanned the web pages. The researchers then analyzed the eye-tracking data to determine how long it took for the students to focus on specific sections of a page – such as the menu, logo, images and social media icons – before they moved on to another section.

Sheng and Dahal found that their subjects spent about 2.6 seconds scanning a website before focusing on a particular section. They spent an average of 180 milliseconds focusing, or “fixating,” on one particular section before moving on.

After each viewing of a website, Sheng and Dahal asked students to rate sites based on aesthetics, visual appeal and other design factors.

“The longer the participants stayed on the page, the more favorable their impressions were,” Sheng says. “First impressions are important for keeping people on pages.”

Sixteen of the 25 websites reviewed in the study were considered favorable by the subjects, Sheng says.

Through this research, Sheng and Dahal found that seven sections of the reviewed websites attracted the most interest from users. The participants spent an average of 20 seconds on each website.

The website sections that drew the most interest from viewers were as follows:

Sheng notes that use of social media links may be of particular interest for college students, more so than for the general population.

Although use of color was not part of the eye-tracking study, participants indicated that it did influence their impressions of websites. “Participants recommended the main color and background color be pleasant and attractive, and the contrast of the text color should be such that it is easier to read,” Dahal wrote in her master’s thesis, titled Eyes Don’t Lie: Understanding Users’ First Impressions on Website Design Using Eye Tracking (PDF).

The use of images was also an important factor in web design, the subjects of the study said. “You must choose your main picture very carefully,” Sheng says. “An inappropriate image can lead to an unfavorable response from viewers.”

The researchers showed students screenshots of the websites, rather than the actual sites, because website download speed, mouse movement and other factors can influence how people interact with websites. In addition, the S&T students were also under no time constraints. The students could view the pages for as long as they wished to form an impression. “Time constraints can affect user behavior,” Sheng says.

On February 14, 2012. Posted in Department of Business and Information Technology, Research, Top Headlines