Dr. Cheryl B. Schrader, associate vice president for strategic research initiatives and former engineering dean at Boise State University, has been selected as the next chancellor of Missouri University of Science and Technology, University of Missouri System officials announced today (Jan. 19, 2012). She will begin serving as chancellor on April 2. 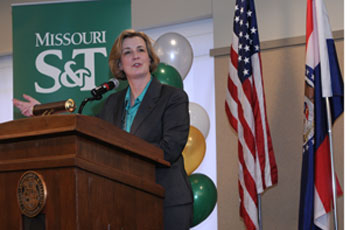 Incoming Chancellor Cheryl B. Schrader speaking to the Missouri S&T community on Jan. 19, 2012, at the Havener Center.

University of Missouri interim President Stephen J. Owens and President-designate Timothy M. Wolfe jointly introduced Schrader to members of the Missouri S&T community as the successor to Chancellor John F. (“Jack”) Carney III, who retired in August.
ARVE Error: need id and provider
Watch the announcement.
About Dr. Cheryl B. Schrader
What others say about Schrader
“Cheryl has consistently been viewed as one of America’s best engineering teachers, and she’s also excelled in research and public service at the university, state, national and professional level,” said Wolfe, who promised to finalize the chancellor’s search as a top priority shortly after accepting the university system presidency in December.

“Steve Owens and the chancellor’s search committee conducted an extraordinarily thorough search,” Wolfe added. “After hearing their recommendations and having the opportunity to meet and interview the finalists, I fully agree with them that Cheryl can best lead this institution with her expansive vision, considerable energy, deep dedication and creativity.”

In making the announcement, Wolfe underscored the university’s commitment to doing all it can to expand the number of students pursuing science, technology, engineering and math to make Missouri, and America, more competitive.

“Cheryl was able to grow undergraduate engineering enrollments by 60 percent over six years as dean of Boise State’s College of Engineering,” he said, adding that graduate enrollments also grew by 36 percent during that time. “Both student success and access were improved under her leadership, resulting in a higher quality, more diverse student body in undergrad, master and doctoral programs.”

He noted that funding for research grants and contracts more than tripled when she served as dean of Boise State’s College of Engineering, and Wolfe described her track record in academic and public service as extraordinary.

“She has been serving on the board of directors of the Discovery Center of Idaho and the board of directors of the Boise Valley Economic Partnership,” Wolfe said. “She’s advised a venture capital firm focused on aspiring technology firms in the Northwest, and she has secured industry partnerships for academic and research programs involving user facilities, laboratory naming opportunities, shared facilities and personnel, and credit and non-credit programs from certificate through doctorate. This important experience will help Missouri S&T continue its steep upward momentum.”

Wolfe added that Schrader is one of only a few women engineers who currently serve as university chancellors or presidents across the country.

Schrader, age 49, told faculty, staff and students she is “deeply honored” to be selected as Missouri S&T next chancellor.

“I choose to lead at institutions that are on the move,” she said. “Missouri S&T’s legacy and potential is truly remarkable. I see an innovative, results-driven academic and administrative leadership team — and very bright, capable students.”

Schrader is past president of the Institute of Electrical and Electronics Engineers (IEEE) Control Systems Society, which is focused on improving performance, safety, reliability and affordability across a wide range of complex systems, from smart grids, telecommunications, biological systems and robotics to transportation, process industries, aerospace and cyber-space worldwide.

She also continues to serve as a member of the ABET Engineering Accreditation Commission. This commission, which is dedicated to providing world leadership in stimulating innovation and excellence in engineering, today accredits 2,100 engineering programs at more than 400 colleges and universities.

“My volunteer work at ABET helps me connect engineering education to the profession in real ways and keeps students at the center of all we do at the university,” Schrader said. “And as a person typically underrepresented in engineering, my interactions with students and programs around the world and in such a formative way has helped in broadening diversity.”

Schrader plans to continue the STEM education research she has pursued for a decade with over $4.5 million in federal, state and foundation funding secured. This research involves developing and assessing innovative teaching approaches that promote learning across the “K through gray” educational spectrum and help students succeed in science, technology, engineering and math.

Schrader earned a bachelor’s degree in electrical engineering with a concentration in computers and communications from Valparaiso University in 1984; and master’s and doctorate degrees in electrical engineering from the University of Notre Dame in 1987 and 1991, respectively. Her doctorate degree’s area of concentration was systems and control, with a minor in computers and mathematics.

While undertaking internships and consulting work at McDonnell Douglas Astronautics Co. in the early 1980s and Chimera Research in the early 1990s, Schrader began her teaching and research career at Notre Dame. After a short period as adjunct assistant professor at Rice in 1991, Schrader moved to the University of Texas at San Antonio where she rose to serve as a tenured professor in electrical engineering and served as associate dean in both a college of sciences and a college of engineering. In 2003 she became professor and dean of the College of Engineering at Boise State. In January 2011, she accepted the position of associate vice president for strategic research initiatives in Boise State’s Division of Research and Economic Development.

Schrader has earned numerous awards throughout her career, including: the Presidential Award for Excellence in Science, Mathematics and Engineering Mentoring from the White House (2005); the IEEE Education Society Hewlett-Packard/Harriett B. Rigas Award; the “Idaho Women Making History” Award; the Exemplary Online Course Award from WebCT; and several awards for best research papers and presentations. She also was named one of Valparaiso University’s Top 150 Most Influential People.

Larry Gragg, a Curators’ Teaching Professor of history and political science at Missouri S&T and chair of the search committee, said: “Members of our search committee believe Cheryl is extraordinarily accomplished, with impressive administrative experience and in-depth knowledge of the role of a technological university. Having hit all markers for performance success, she is observant, perceptive, engaging, collaborative and motivating. She expressed a vision for differentiating Missouri S&T by focusing on innovation and creativity.”

Incoming Missouri S&T Chancellor Cheryl B. Schrader with her husband Jeff and daughter Ella, age 5. The Schraders also have a son, Andrew, who is a mechanical engineering student at Valparaiso University.

Schrader’s husband, Jeff, is chief legal counsel for the Idaho State Board of Education. The couple has a son, Andrew, 19, who is studying mechanical engineering at Valparaiso University, and a daughter, Ella, who is 5.