Although he teaches speech and media studies at Missouri University of Science and Technology, Aaron Eckstein prefers to communicate visually. And the themes he addresses in his art are also topics of discussion in the classroom.

Eckstein, a lecturer in speech and media studies at Missouri S&T, focuses on teaching students “a different way to perceive reality, specifically through the deconstruction of the image world we are faced with – how to watch TV, how to listen to music, how to tell the real from the fake.” 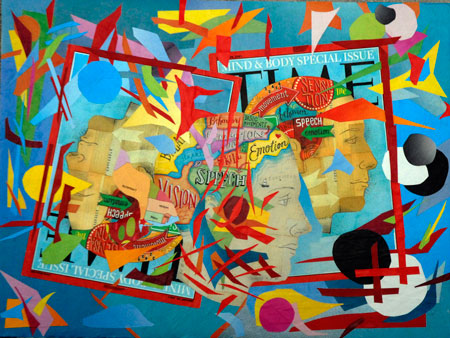 "Illusory Fixations," a collage by Missouri S&T lecturer Aaron Eckstein, appeared on the cover of the journal ETC: A Review of General Semantics

It’s important that S&T students understand the impact media images have on shaping their perceptions of reality, Eckstein says.

For example, he shares cover images of different magazines – former Vice President Dick Cheney on TIME and rapper 50 Cent on VIBE – and engages students in a discussion about how those publications “use boundaries of genre and form to disassociate similar content.”

“They both have that gangster attitude and mentality, but one’s on VIBE and the other is on TIME. Get it?” Eckstein says.

One of Eckstein’s works, titled “Illusory Fixations,” appeared on the cover of the April 2011 edition of ETC: A Review of General Semantics. He created the collage by deconstructing two copies of TIME magazine’s Jan. 29, 2007, Mind and Body issue. In the collage, paper shards from the magazine’s articles, photos and ads are freed from the publication’s “box” into a chaotic presentation of color.

“I took a legitimate publication that tries to box in information, tries to create order,” Eckstein says. “But with this fluctuating reality bombarding our senses, and all this color, all this chaos, how can you call anything a fact?”

Eckstein created the artwork as a gift for Dr. Lance Haynes, chair of arts, languages and philosophy at Missouri S&T. He later submitted an electronic image of the collage to the journal for publication.

“Illusory Fixations” is also Eckstein’s response to a four-year conversation with Haynes about “the strategic oral and literate bombardment of the senses with content presented as fixed or fact when all perception seems to be streaming.”

“This illuminates an obvious tension,” Eckstein says. “How can information disseminated in an environment of constantly changing, unfixed realities be presented as stable fact?”

While much of his art also addresses spiritual issues – he tries to convey “a sense of spiritual urgency” in his works – Eckstein’s classroom approach has more to do with the issues addressed by “Illusory Fixations.” These are “broad, existential concepts” about the nature of reality and how media organizations present information as fact.

This semester, Eckstein teaches three sections of Speech and Media Studies, which is an introductory course, and one section of the upper-level course Foundations of Media. In all of these courses, Eckstein tries to facilitate conversations among students “to give them an instrumental learning experience beyond just giving speeches.”

“It’s all about the discussions,” he says. “I let it evolve on its own. I celebrate my students’ freedom and their ability to control their own academic destinies.”

But he does set parameters. No gum or food is allowed in his classes, and cell phones must be turned off. “After all,” Eckstein says, “class is not a party.”

He also requires them to take an audience-centered approach to delivering their speeches and presentations. “This supplants the traditional literate approach with a more practical, skills-based methodology,” he says.

“I tell them, ‘I’m your audience, so you know what you have to do to keep me interested. Don’t bore me.’ That pretty much sets the tone for the semester,” Eckstein says.

“It was Dr. Haynes’ mentoring and collegial wisdom that allowed me to recognize the process of education as art and liberation,” says Eckstein.

“Illusory Fixations” appears on the cover of the April 2011 issue of ETC. The original framed artwork is in Haynes’ office in the Humanities-Social Sciences Building at Missouri S&T.

For more information about Eckstein’s artwork, visit his website.

On October 19, 2011. Posted in Department of Arts, Languages and Philosophy, News, Top Headlines