As president in the early 1960s, John F. Kennedy’s challenges ranged from racial segregation and civil rights, to the Cuban Missile Crisis and the “space race.” In a new book titled simply, John F. Kennedy, A Biography, Dr. Michael E. Meagher and Dr. Larry D. Gragg investigate choices made by the all-too-human Kennedy during his brief tenure as president. 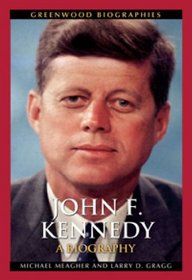 Meagher, an associate professor in the history and political science department at Missouri University of Science and Technology, says the book examines the former president’s life and political career with an emphasis on his foreign policy.

“The book discusses his tragic miscalculations in the Bay of Pigs and his doubts about democracy,” he says. “Kennedy first expressed these doubts when he was a Harvard undergraduate. He continued to question democracy in his later political life, including during his presidency.”

Meagher says the book also delves into Kennedy’s willingness to use “fear-based tactics” to manipulate the American people during the Berlin Crisis of 1961 and the Cuban Missile Crisis of 1962.

This is Meagher’s first book. Gragg has authored books about the Salem Witch Trials, the Quakers and the colonization of the West Indies island of Barbados. He will soon publish a book about the perceptions of Las Vegas in popular culture and a biography of Benjamin “Bugsy” Siegel, who played a role in the development of Las Vegas.

Gragg is Curator’s Teaching Professor and chair of the history and political science department at Missouri S&T. A member of the faculty since 1977, he holds a Ph.D. from the University of Missouri-Columbia, and teaches courses in colonial and revolutionary America.