The poet William Blake once wrote that we could “see a world in a grain of sand.” Today, environmental engineers are seeing the world beneath the surface through a greener part of nature: the trunks and branches of trees.

This practice of sampling and analyzing tissue from trees and other plants to determine the presence of contaminants in soil and groundwater holds promise because it gives engineers a quick, accurate and inexpensive way to measure the extent of environmental pollutants without having to dig into the ground. 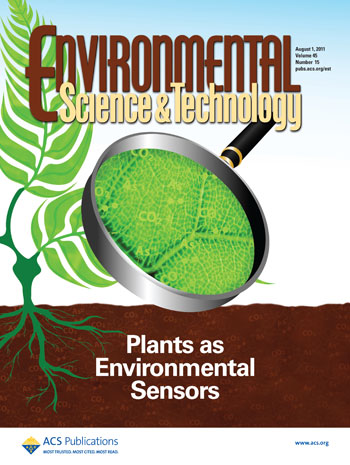 As Dr. Joel Burken, professor of civil and environmental engineering at Missouri University of Science and Technology, explains in the August cover article of the journal Environmental Science & Technology, this new approach “is rapid, fast, inexpensive and causes little or no discernible damage to personal or ecological systems.”

Burken, an expert in the emerging field of “phytoforensics,” is the principal author of the journal’s August feature story, which describes how these new approaches are being used for monitoring contaminants. The August issue will be released on Monday, Aug. 1.

“The water and wood of a tree is partly a reflection of groundwater chemistry,” write Burken and his co-authors in the article, titled Phytoforensics, Dendrochemistry, and Phytoscreening: New Green Tools for Delineating Contaminants from Past and Present.

Because of this molecular makeup, researchers are using trees and other plants as “bioindicators” to map pollutants in the environment, write Burken and his co-authors, Dr. Don Vroblesky, a research scientist with the U.S. Geological Survey Water Science Center in Columbia, S.C., and Dr. Jean Christophe Balouet, an environmental forensics expert and principal scientist at Environment International in Paris, France. For example, Burken and his colleagues have tested their phytoforensics method at more than 35 sites in six countries and nine states, including five communities in Missouri.

Trees act as nature’s solar-driven sump pumps, actively transporting water from the ground by using the energy of the sun and the air around them, Burken says. Through a process known as “evaportranspiration,” a tree’s extensive root system absorbs all the water and nutrients it needs. At the same time, the tree absorbs trace amounts of chemicals in the water and soil and transports those chemicals to the trunk, branches and leaves. 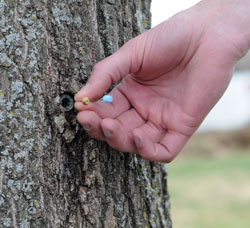 S&T graduate student Matt Limmer uses the SPME, or solid-phase microextraction fiber, to extract a sample from a tree in Rolla’s Schuman Park.

In their ES&T article, Burken, Vroblesky and Balouet describe how recent advances in plant-monitoring technology have fared in determining contamination levels in soils and groundwater. Among the most recent advances is a more sensitive method of putting sampling devices in trees designed by Burken and his students at Missouri S&T. One of the devices is called a solid-phase microextraction fiber, or SPME. The SPME is a thin filament – smaller than a pencil lead – that can detect traces of chemicals at minute levels, down to part per trillion or parts per quadrillion.

In the article, Burken, Vroblesky and Balouet also discuss advances in determining pollution levels over time by analyzing the chemistry of a tree’s growth rings, a method known as “dendrochemistry.” This method can look back in time, giving a history of subsurface contaminantion. Other sampling methods show potential for using leaves, bark and needles of plants as “proxy recorders” of airborne contaminants. Methods to study presence of pollutants on these surfaces can be used to pinpoint a local source of airborne pollution as well as to investigate more widespread evidence of airborne contamination, including radioactive contaminants.

Finally, the authors discuss the potential use of these green approaches to monitoring in legal proceedings. Dendrochemistry, for example, may help lawyers trace the origin of contamination on property that has been owned over time by multiple parties.

While Burken, Vroblesky and Balouet believe phytoforensics are important and valuable tools for determining the presence of pollution, they also point out that their use may be limited in some instances. For example, a tree’s root system may be too shallow to detect groundwater contamination well below the surface, and some chemicals (such as the explosive trinitrotoluene, or TNT) may biodegrade rapidly in a tree’s root system and therefore not be easily detected above the surface. Also, it’s important to sample several plants in an area in order to obtain the most accurate understanding of potential contamination, the authors say.