Hard-to-heal open wounds may have met their match in the form of a cottony glass material developed at Missouri University of Science and Technology. 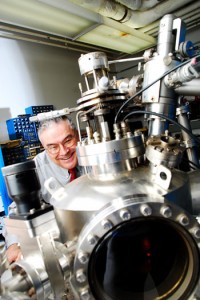 The glass fiber material could become a source of relief for diabetics fighting infections. It also could be used by battlefield medics or emergency medical technicians to treat wounds in the field.

In a recent clinical trial, the material was found to speed the healing of venous stasis wounds in eight out of the 12 patients enrolled in the trial. Details about the trials and the material were published in the May issue of the American Ceramic Society‘s Bulletin magazine.

The material – a nanofiber borate glass – was developed in the laboratories of Missouri S&T’s Graduate Center for Materials Research and the Center for Bone and Tissue Repair and Regeneration, says Dr. Delbert E. Day, Curators’ Professor emeritus of ceramic engineering and a pioneer in the development of bioglass materials. Day and his former student, Dr. Steve Jung, developed the material over the past five years.

Other bioactive glass materials are formed from silica-based glass compositions and have been used primarily for hard-tissue regeneration, such as bone repair. But Day and Jung experimented with borate glass, which early lab studies showed reacted to fluids much faster than silicate glasses.

“The borate glasses react with the body fluids very quickly” when applied to an open wound, says Day. “They begin to dissolve and release elements into the body that stimulate the body to generate new blood vessels. This improves the blood supply to the wound, allowing the body’s normal healing processes to take over.”
Clinical trials at Phelps County Regional Medical Center in Rolla began in the fall of 2010 with 13 subjects. One dropped out early in the process. All suffer from diabetes and had wounds that had been unhealed for more than a year.

Depending on the severity of the wound, Day says the wounds can heal within a few weeks to several months after the material is applied. “Within a few days, most patients see an improvement,” he says.

The material is produced at Mo-Sci Corp., a glass technology company founded by Day. Jung is a glass scientist at the company and holds bachelor’s and master’s degrees in ceramic engineering and a Ph.D. in materials engineering from Missouri S&T.

“Rolla is extremely fortunate to have the three key ingredients needed to take research from the idea stage to the commercial product stage,” says Day, who also invented TheraSphere, a glass product now used to treat patients with liver cancer at more than 100 sites worldwide, including Barnes Jewish Hospital in St. Louis. “We have the university, which provides the research expertise, Phelps County Regional Medical Center for the clinical trials, and Mo-Sci for the manufacturing and commercialization.”

Day foresees expanding the clinical trials to include patients with other types of wounds, such as burn victims.

On May 4, 2011. Posted in Materials Science and Engineering, Research, Top Headlines