Researchers at Missouri University of Science and Technology are trying to get proteins to create the sticky plaque often associated with neurological diseases like Alzheimer’s, Parkinson’s and even Mad Cow. If successful, the study would better equip researchers to prevent or find a cure for these diseases. 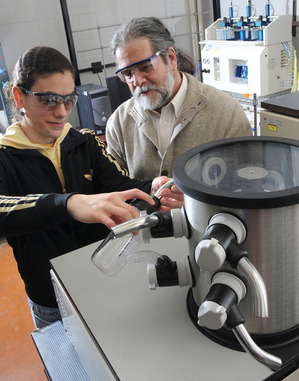 S&T researchers are studying how proteins and peptides behave when they are near a solid surface – such as when a protein in blood is near the inner surface of a vein. Photo by B.A. Rupert

“All of these diseases have in common the presence of plaque,” says Dr. Daniel Forciniti, professor of chemical and biological engineering at Missouri S&T. “But all involve different proteins.”

Nearly 15 years ago, Forciniti’s group began studying how proteins and peptides behave when they are near a solid surface – such as when a protein in blood is near the inner surface of a vein. “We have developed considerable expertise in both theoretical and experimental studies of proteins at solid-liquid interfaces,” he says. “The transition to the study of the effect of surfaces, such as tissue, on the formation of protein aggregates was a natural one.”

While the debate over what causes these diseases continues, it’s commonly accepted that an abnormal buildup of these protein deposits on the surface of the brain, also known as amyloid deposits or plaques, are found in people with Alzheimer’s disease.

Scientists have been able to trick proteins into creating amyloid plaques, but only in extremely acidic and high-temperature environments. That situation is vastly different from what occurs in the human body, Forciniti says.

“They subject these proteins to harsh conditions at unrealistically high concentrations,” Forciniti says. For example, these proteins may be immersed in a 3 pH solution, significantly more acidic than a human body’s pH of 7.5. Instead of using nanomoles of peptides, as is found in the brain, millimoles of peptides are used.

Forciniti’s experimental and computational studies are focused on making amyloid deposits at physiological conditions using model peptides. Under the direction of Forciniti, a group of undergraduate and graduate students have synthesized tailored peptides that — in both the absence and presence of a solid surface — form amyloid deposits at conditions that are closer to those found in the human body. The group is also working to better understand what types of peptide and surface structures encourage the formation of plaque.

Despite the project’s complexity, Forciniti says having undergraduates participate in the project is a win-win for everyone involved.