Traffic along southbound portions of U.S. Highway 63 (Bishop Avenue) between 10th and 11th streets will be affected beginning Tuesday, Aug. 24, due to construction work at the Miner Recreation Building of Missouri University of Science and Technology. 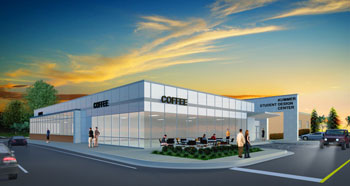 An architect’s rendering of the Kummer Student Design Center. The facility is scheduled to be completed by early 2011.

Demolition work begins Aug. 24 at the building, also known as the former Holsum Bread Co. building, located at the northwest corner of 10th Street and Bishop Avenue. The work will require periodic nighttime closure of the right southbound lane of Highway 63/Bishop Avenue between 10th and 11th streets beginning Tuesday, Aug. 24. Turns on or off of 11th Street on the west side of U.S. 63 will be prohibited during these closures.

The work will be conducted between 7 p.m. and 6 a.m. and is expected to last for three days. Future construction at the facility may require similar lane closures. Missouri S&T will notify the community of future traffic disruptions related to this project.

The site will become home of the Kummer Student Design Center, which will house Missouri S&T’s student design teams. The $2.75 million project was funded entirely through private gifts to the university, including a $1.25 million gift from Fred and June Kummer of Huntleigh Village, Mo. Fred Kummer is a 1955 civil engineering graduate of Missouri S&T and the chief executive officer of St. Louis-based HBE Corp.

The project is expected to be completed by early 2011.