When Dr. Mehdi Ferdowsi and Ph.D. student Andrew Meintz offered the inaugural class on electric and hybrid vehicles last January at Missouri University of Science and Technology, they made an instant connection with students from a variety of engineering disciplines. 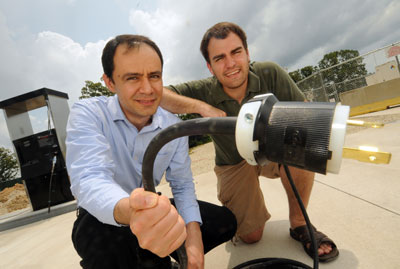 Seventeen students enrolled in the course, even though it was hastily put together and not widely advertised.

“They obviously see this as a new field that is going to grow and ultimately become a new career path,” says Ferdowsi, assistant professor of electrical and computer engineering at Missouri S&T.

That’s what Ferdowsi, Meintz and the Obama administration are banking on. Fueled by $5 million in stimulus funding through the American Recovery and Reinvestment Act of 2009, Missouri S&T is developing a new undergraduate minor in advanced automotive technology to better prepare students for the plug-in economy.

Last semester’s introductory course, taught by Meintz, a Ph.D. student in electrical engineering, was S&T’s opening into the new world of plug-in electric vehicles. It was what Ferdowsi calls “a gateway class” designed “to familiarize students with the concepts of plug-in electric and hybrid vehicles.”

This semester S&T has ramped up the course offerings for plug-in and hybrid automotive technology. The curriculum, designed by Ferdowsi – an expert in power electronics – and funded through stimulus dollars, includes half a dozen courses at both the undergraduate and graduate levels.

An initiative as ambitious as converting the auto industry from gasoline to electricity requires far-reaching efforts. So S&T is also integrating coursework into existing classes and developing graduate certificate programs to help practicing engineers move into the emerging field of plug-in technology. Ferdowsi and his colleagues at S&T also are working with two other Missouri schools – the University of Central Missouri and Linn State Technical College – to provide additional work force training. In addition, Missouri S&T is working with the St. Louis Science Center to help educate the public about the importance of electric vehicles.

“Developing new course material is hard, especially when you’re talking about a new car that hasn’t even been developed yet,” says Ferdowsi. But after the hard work of creating a new course of study is done, the payoff to the nation’s economy will be huge. “We will have a pipeline of students prepared for this industry.”