Posted by Andrew Careaga
On February 3, 2010

Dr. Harvest Collier, vice provost for undergraduate studies at Missouri University of Science and Technology, is one of 10 educators in the United States to be selected as Outstanding First-Year Student Advocates by a national organization based at the University of South Carolina. 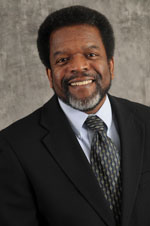 Collier and the other recipients are being recognized for their efforts to improve the experiences of first-year college students.

As vice provost of undergraduate studies and a chemistry professor at Missouri S&T, Collier has initiated and led several programs designed to improve student learning, particularly in the areas of science, technology, engineering and mathematics. An advocate of collaborative learning and the use of technology in the classroom, Collier has also been instrumental in developing programs such as “Hit the Ground Running” to help incoming freshmen make the transition from high school to college.

Collier also serves as director of Missouri S&T’s Center for Educational Research and Teaching Innovation, a position he has held since 2003. The center promotes faculty development in areas of collaborative and experiential learning, technology-enhanced learning, and educational research.

Collier joined the Missouri S&T faculty in 1982 as an assistant professor of chemistry. He was promoted to associate professor in 1988 and professor in 1994. From 1996-1999, he served as chair the chemistry department, and from 1999-2002, he was associate dean for the College of Arts and Sciences. He was named vice provost for undergraduate and graduate studies in 2001 and in 2007 became vice provost for undergraduate studies.