For manufacturing simulation, Wii devices might be a perfect fit

Posted by Andrew Careaga
On February 2, 2010

Ready to give up on that new year’s resolution to get in shape? If so, don’t sell your Wii Fit on eBay just yet. Dr. Ming Leu might have a use for it – or for the remote, anyway. 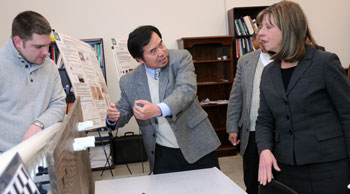 Professor Ming Leu discusses his assemblyline-tracking research with U.S. Rep. Jo Ann Emerson, whose district includes Rolla and Missouri S&amp;amp;T, during a recent visit by Emerson to campus. Looking on is Emerson staff member Darren Lingle. Leu’s research involves the use of Wiimote cameras to track movements along assembly lines.

Leu, a professor at Missouri University of Science and Technology, is using remote-control devices from the popular Wii gaming console and putting them to work to improve manufacturing processes. He’s using the devices – called Wiimotes – to record an assembly process in hopes of improving the way companies train workers, shorten cycle time, reduce workplace injuries, and help manufacturers improve the way they communicate with plants all over the globe.

What makes the Wii device so appealing to Leu? The Wiimote has wireless communication, covers a good measurement range and is very inexpensive. Just as gamers can use the Wiimote to simulate the movements of a tennis racquet or bowling ball, so a properly situated Wiimote camera can capture movements of an assembly-line worker throughout a variety of processes.

“The Wiimotes allow us to easily capture motion in the assembly process wirelessly,” says Leu, the Keith and Pat Bailey Missouri Distinguished Professor of Integrated Product Manufacturing. “We can track that motion, analyze the processes and make improvements based on the data generated through the motion-capture.”

The Wiimote camera works by detecting an infrared signal that latches onto light-emitting diode (LED) sensors and tracks the movement. In Leu’s process, workpieces, assembly tools, robots or other machines, as well as assembly-line workers, would be equipped with LEDs that the Wiimote cameras can track. Any number of infrared cameras based on the Wiimote could be mounted throughout a factory to capture and record movements.

Leu is exploring the feasibility of this idea by recording a manufacturing process under way in his home department of mechanical and aerospace engineering. A group of students in that department is fabricating a microsatellite as part of a design project.

Leu has set up the Wiimotes to track its assembly process in lab space of Missouri S&T’s Center for Aerospace Manufacturing Technologies (CAMT), located in Toomey Hall on campus. Leu is the director of CAMT, a consortium of aerospace manufacturers and suppliers that works with the university and the Air Force to develop new and optimized approaches to aerospace manufacturing.

The idea for using the Wiimotes actually came from engineers at Boeing, the CAMT’s major partner, who told Leu about some earlier research with Wii components at Carnegie Mellon University.

Leu envisions a Wiimote-based recording and monitoring system that will not only improve manufacturing processes on the factory floor, but also can provide training for employees in remote locations.