How many “daze” till St. Pat’s? There’s an app for that

Wondering how long it is until the next St. Pat’s Celebration at Missouri University of Science and Technology? There’s an app for that. 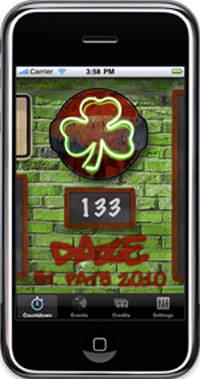 The "Daze" application lets users know how long it is until the next St. Pat’s Celebration at Missouri S&T.

A group of Missouri S&T students has developed an iPhone application that counts down the number of days – or “daze,” in St. Pat’s parlance – until the next annual celebration. The students created the application through a company founded in 2008 by Michael Orlando, a senior majoring in electrical engineering and interdisciplinary engineering.

The university’s annual St. Pat’s Celebration is a big deal among students and alumni, and Orlando hopes this mobile application will tap into that interest.

“We wanted to make something to let everybody know there was someone on campus making iPhone apps,” says Orlando, a St. Louis County native who is also pursuing a master’s degree in engineering management at S&T.

“We thought, ‘What better way than St. Pat’s to get everybody’s attention?'”

When activated, the application launches an audio file of students announcing how many days until “St. Pat’s best ever.” Orlando’s company – Interdisciplinary Design Collaborative, or IDC for short – worked with members of the campus’s St. Pat’s Celebration Committee to record the audio.

The app is available for free to iPhone users through Apple’s App Store or via iTunes (users must have the iTunes software installed on their computers to access that link).

Missouri S&T’s St. Pat’s Celebration began in 1908, when a group of students, returning from a St. Patrick’s Day event at the University of Missouri-Columbia campus, decided to dub St. Patrick the unofficial “patron saint of engineers” and skip school. The celebration has been held annually ever since. (Check out Missouri S&T’s Best Ever Blog for images and information from the 2008 and 2009 celebrations.)

The St. Pat “Daze” app was the idea of Missouri S&T student Paul Voss, a senior in engineering management who was chosen to portray St. Pat for the celebration’s 100th anniversary in 2008.

Orlando hopes the gizmo will attract attention to IDC’s other iPhone applications under development. The company currently offers an application that allows users to scan a product’s barcode to get pricing information and user reviews. The app uses the iPhone’s camera to take a picture of the barcode.

The “Barcodescan” application has already been downloaded by nearly 250,000 iPhone users, Orlando says. He and other students are working on improving the app and offering it for sale. They hope to launch the new barcode application before Thanksgiving.

Orlando founded IDC in September 2008 and serves as the company’s chief executive officer. Two other students also hold executive positions with the company: R.J. Miller, a senior in interdisciplinary engineering and graduate student in engineering management, who is the chief administrative officer, and Colby Hall, an MBA graduate student, who is the chief operating officer. A total of 10 Missouri S&T students are on the IDC payroll.

More information about the company is available on the IDC website, www.idesignco.org.