Missouri University of Science and Technology, a national leader in energy research and education, will soon strengthen that emphasis thanks to a $3.4 million gift from a retired oil and natural gas executive and graduate of the university. 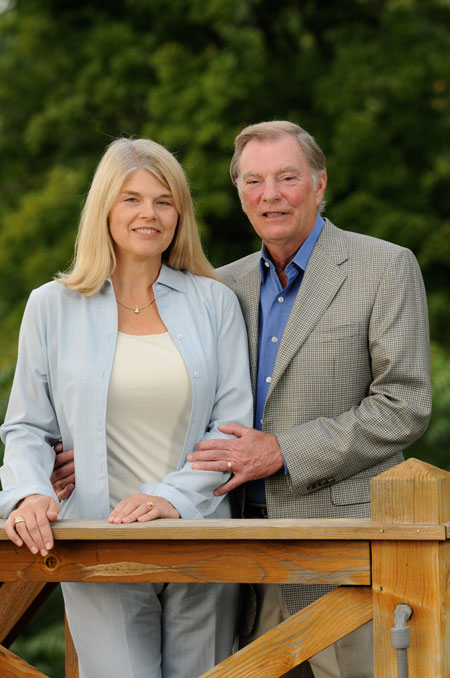 The gift from Wayne Laufer, a 1967 civil engineering graduate of Missouri S&T, and his wife, Gayle, will fund the university’s first endowed chair in energy research. Their gift is also the largest for an endowed faculty position ever received by any of the University of Missouri System’s four campuses.

The Laufers announced their gift Saturday (Sept. 19, 2009) during the university’s sixth annual gala fundraising event held that evening at La Charrette, the home of Bob and Kim Brinkmann of St. Albans, Mo. Brinkmann is the president of Brinkmann Constructors of Chesterfield, Mo., and a 1971 graduate of Missouri S&T.

Laufer is the retired co-founder and CEO of Bois d’Arc Energy Inc., an NYSE Houston-based company that specialized in offshore oil and natural gas exploration and production. Laufer retired from Bois d’Arc executive management in November 2007 but remained active on the board of directors until the company was sold to Stone Energy Corp. for $1.4 billion in August 2008.

“The Laufers’ generous donation to our energy program will certainly position Missouri S&T among the nation’s leaders in energy research and education,” says Chancellor John F. Carney III. “Wayne and Gayle both recognize the importance of developing innovative ways to address our nation’s energy challenges, and we’re excited that they have decided to invest in Missouri S&T.”

“I believe it’s very important for our nation to focus its capital investment and scientific talent on ways to more efficiently develop and utilize our primary sources of energy, and that’s one reason Gayle and I provided this support to Missouri S&T,” says Laufer.

The donation will be used to fund a new faculty position to be filled by a national leader in energy research and education. A committee of faculty, students and alumni will lead a national search for the position, and Laufer will be involved in the search, Carney says.

Since earning his civil engineering degree from the Rolla campus, Laufer’s career has been in the energy industry. His first job out of college was as a production engineer for Shell Oil Co. He worked in various capacities for Shell from 1967-1977, then co-founded an independent energy consulting company in 1977. He served as vice president of operations and production for two independent companies from 1980-1983. In 1984, he co-founded Bois d’Arc Resources and Bois d’Arc Operating Corp. and served as managing partner and president until all company assets were sold in December 1997. Continuing the Bois d’Arc tradition, Bois d’Arc Offshore was formed in 1998 and was active in Gulf of Mexico exploration until it was folded into the Bois d’Arc Energy Inc. initial public offering in 2005.

Formerly a registered professional engineer in the state of Texas, Laufer is a member of the Society of Petroleum Engineers and the Louisiana Oil and Gas Association.

At Missouri S&T, Laufer was a member of Sigma Pi fraternity, where he held several offices, and was a St. Pat’s Board representative. He is a member of the Missouri S&T Order of the Golden Shillelagh donor society.

The Laufers now live in Sanibel, Fla., and spend their summers on San Juan Island, Wash.

Missouri S&T’s focus on energy education and research is deeply rooted in the university’s history. Founded in 1870 as the University of Missouri School of Mines and Metallurgy, some of the campus’s earliest graduates were involved in the energy exploration and development needed to fuel the Industrial Revolution.

Today, Missouri S&T’s energy research includes research on oil, natural gas, coal and nuclear power in addition to studies of supplemental power sources such as wind, solar and hydrogen. University researchers are also involved in an effort to transform the nation’s aging power infrastructure into a “smart” grid that mimics the Internet. Recently, the university received a $5 million federal appropriation to prepare the next generation of engineers for alternative automotive vehicles, such as plug-in electric cars.

The campus also is home to Missouri’s first nuclear reactor – a low-power reactor designed as a teaching tool for nuclear engineering students – and the Solar Village, a neighborhood of three solar-powered homes designed and built by students as part of an international design competition. In the fall, a fourth home will be added to the site.