Growing – and precisely aligning – microscopic, spear-shaped zinc oxide crystals on a surface of single-crystal silicon, researchers at Missouri University of Science and Technology may have developed a method to make more efficient solar cells. 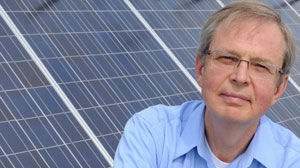 New nanomaterials research by Missouri S&T Professor of Discovery Jay A. Switzer (above) may lead to the production of more efficient solar cells.

Dr. Jay A. Switzer and his colleagues at Missouri S&T report in the journal Chemistry of Materials that their simple, inexpensive process could also lead to new materials for ultraviolet lasers, solid-state lighting and piezoelectric devices.

“It’s kind of like growing rock candy crystals on a string,” says Switzer, the Donald L. Castleman/Foundation for Chemical Research Professor of Discovery at Missouri S&T. But instead of using sugar water and string, Switzer’s team grows the zinc oxide “nanospears” on the single-crystal silicon placed in a beaker filled with an alkaline solution saturated with zinc ions.

The process yields tilted, single-crystal, spear-shaped rods that grow out of the silicon surface, like tiny spikes.

The spears are about 100-200 nanometers in diameter – hundreds of times smaller than the width of a human hair – and about 1 micrometer in length. A nanometer – visible only with the aid of a high-power electron microscope – is one billionth of a meter, and some nanomaterials are only a few atoms in size.

The research is reported today (Tuesday, Aug. 11) in Chemistry of Materials‘ online ASAP (“as soon as publishable”) section and will appear in an upcoming issue.

Zinc oxide is a semiconductor that possesses some unusual physical properties, Switzer says. The material both absorbs and emits light, so it could be used in solar cells to absorb sunshine as well as in lasers or solid-state lighting as an emitter of light.

Silicon is also a semiconductor, but it absorbs light at a different part of the spectrum than zinc oxide. By growing zinc oxide on top of the silicon, “you’re putting two semiconductors on top of each other,” thereby widening the spectrum from which a solar cell could draw light, Switzer says.

“You can absorb more light and possibly get more power out” with a zinc oxide-silicon solar cell, he says. 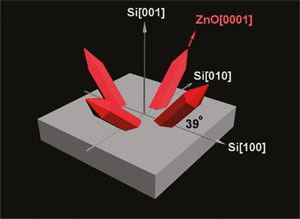 These red zinc oxide “nanospears” developed by Missouri S&T researchers grow on a surface of silicon. (Illustration provided by Dr. Jay A. Switzer.)

Previous efforts to grow zinc oxide on silicon have been limited to expensive ultra-high-vacuum methods, and because of silicon’s high reactivity, it’s been impossible to deposit the zinc oxide directly, without the use of a third material as a buffer. In addition, previous attempts to align the two materials epitaxially – or perfectly one on top of the other – have been unsuccessful until now. By tilting the nanospears 51 degrees, Switzer and his team have reduced the mismatch from 40 percent to just 0.2 percent, a near-perfect alignment.

Epitaxially aligning the zinc oxide and silicon is important to ensure higher efficiency, Switzer says.
Switzer’s research is supported through a four-year, $700,000 grant from the Department of Energy’s Office of Basic Energy Sciences, Materials Sciences and Engineering Division.

On August 11, 2009. Posted in Department of Chemistry, Research, Top Headlines