Laura A. Confer of Fenton, Mo., a mechanical engineering student at Missouri University of Science and Technology, began her first full day on Friday, June 5, as the student representative to the University of Missouri Board of Curators. 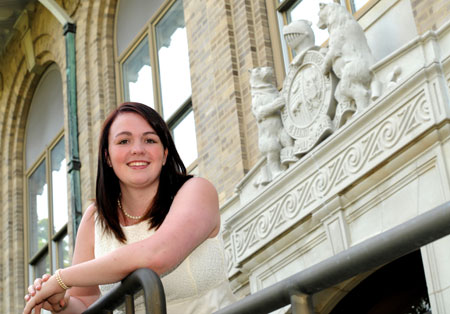 Laura A. Confer, a mechanical engineering student at Missouri S&T, is the new student representative to the University of Missouri Board of Curators.

Confer, 19, was appointed to the position by Missouri Gov. Jay Nixon and sworn in Thursday, June 4, during the Board of Curators meeting on the University of Missouri-Kansas City campus. The board meeting continues today at UMKC.

The Board of Curators is the governing board of the four-campus University of Missouri System.

“I’m honored to be appointed to this position and look forward to serving the students, faculty and staff of the university,” Confer says. “I would like to thank the governor and the Intra-Student Council of the four campuses for giving me this opportunity to serve.”

A 2007 graduate of Rockwood Summit High School in Fenton, Confer will be a junior at Missouri S&T in the fall. She is a PRO leader in Missouri S&T’s Preview, Registration and Orientation program for incoming students. She also has served as vice president of Phi Eta Sigma honorary society and will become president of that organization in the fall. She is the daughter of James and Nancy Confer of Fenton.