Restaurants of the future may have a smarter way to serve sodas and mixed drinks, if an idea developed by a trio of Missouri S&T students catches on. 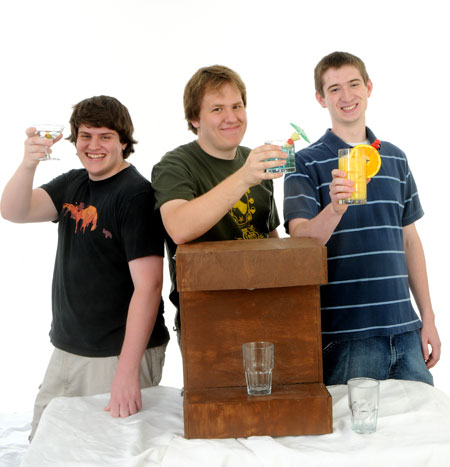 The three students have created a “smart” drink dispenser that relies on a web interface, RFID tags and other technological innovations. They think their prototype could make life easier for bartenders, waiters and waitresses, and even customers at self-service beverage fountains. Plus, they see their invention as a money-saver for businesses because it would more evenly control and monitor the amount of liquids dispensed.

Missouri S&T students Richard Allen of Kirksville, Mo., Jon Blount of Kansas City, Mo., and Nick Pegg of St. Peters, Mo. – all graduating seniors – created their prototype “intelligent drink dispenser” for their senior design class in computer engineering. But the idea for the machine grew out of conversations Allen and Pegg had as sophomores.

“Richard and I thought up this idea and just thought to ourselves, ‘Man, if we’re in senior design together, we should totally do this,'” says Pegg.

The prototype is a simple wooden box that looks like a smaller version of the beverage dispensers found in fast-food restaurants or service stations. Unlike those dispensers, however, the S&T students’ prototype is controlled through a computer interface that allows the user to select from a menu of drink options.

ARVE Error: need id and provider
Missouri S&T student Nick Pegg demonstrates the drink dispenser prototype (via Nick Pegg/YouTube)
The prototype can dispense and mix up to three different liquids – although, as Allen points out, it could be expanded to up to 24 options. When demonstrating the machine, the students used colored water – red, blue and yellow – to create a variety of mixes.

Another feature of the prototype is the use of radio frequency identification (RFID) technology. By adding RFID tags to the bottom of glasses and then programming that information into the computerized system, the students created a dispenser that can remember what kind of drink each glass should contain. This would come in handy for waiters and waitresses refilling drinks at a restaurant, Pegg suggests. A sensor beneath the surface, where the glass would sit while being refilled, would read the glass’s RFID tag.

Allen, Blount and Pegg weren’t required to conduct a market analysis for their project, so they don’t know whether a demand exists for their product. But they see it as something that could come in handy for personal use. The smart system would be nice for a home bar, Pegg says, and could even be used to dispense smart drinks.

The three designers will be busy with other pursuits after they graduate from Missouri S&T on Saturday, May 16. Blount plans to enroll in graduate school at S&T next fall to pursue a master’s degree in computer science. Allen will go to work for Garmin International in Olathe, Kan., writing software for backpacking global positioning systems, and Pegg will begin work for steel manufacturer Nucor at the company’s Blytheville, Ark., mill.
Related links:
Richard Allen’s website, blogsauce
Nick Pegg’s website

On May 11, 2009. Posted in Computer Science, Electrical and Computer Engineering, Top Headlines