Recent experiments to create a fast-reacting explosive by concocting it at the nanoscopic level could result in more spectacular firework displays. But more impressive to the Missouri University of Science and Technology professor who led the research, the method used to mix chemicals at that tiny scale could lead to new strong porous materials for high temperature applications, from thermal insulation in jet engines to industrial chemical reactors. 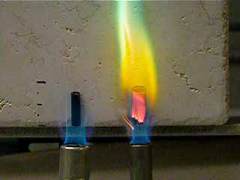 Researchers led by Dr. Nicholas Leventis, a professor of chemistry at Missouri S&T, reported in the April 8 issue of the Journal of the American Chemical Society that they created a new type of flammable nanomaterial by combining an oxidizer (copper oxide) with an organic fuel (a resorcinol-formaldehyde polymer, or RF). Nanomaterials are made from substances that are one billionth of a meter – the size of a few molecules. This achievement has been highlighted in the online edition of Nature Chemistry.

Pictured: two versions of the aerogel — the RF-only version (left) and the mixed version (right).
The new nanomaterial burned rapidly when ignited by a flame, leaving behind minimal residue, Nature Chemistry‘s April 3 Research Highlights section reported on the Leventis research.
While the Leventis research is based on the hypothesis that the performance of so-called low-order explosives such as gunpowder can be improved by mixing the oxidizer and fuel as closely as possible – at the nano level, nanoparticle to nanoparticle – Leventis is more excited about the “very far-reaching implications” of the experiment.

“The broader impact of this research is in the methodology of making intimate mixtures of nanoparticles that can react efficiently and fast. That will most certainly lead to future innovations in materials science. Energetic materials is just an example,” he says.

Mixing materials at the nano level may lead to stronger substances, because the two materials may be more closely woven together. Leventis sees this approach leading to such materials engineering breakthroughs as the development of microporous ceramics that can hold up under extremely high temperatures.

The more immediate application of this research could be in pyrotechnics, Leventis explains. Fireworks are considered low-order explosives, meaning that their reaction rate can be improved by mixing the oxidizer and fuel as closely as possible.

With this research, Leventis and his Missouri S&T colleagues worked with Dr. Hongbing Lu, a professor of mechanical and aerospace engineering at Oklahoma State University, to create a fluffy, low-density mixed aerogel from the copper oxide and the RF nanoparticles.

To make the mixed network of nanoparticles, the researchers devised a one-pot sol-gel method, in which they used the gelling colloidal solution (“sol”) of one component (copper oxide) as the catalyst for the gelation of the second component (RF). In the final product, copper oxide acted as the fuse to catalyze, or ignite, the RF fuel.

The research was originally published March 17 in the online editions of the Journal of the American Chemical Society. Working with Leventis at S&T were Dr. Chariklia Sotirou-Leventis, professor of chemistry, and Naveen Chandrasekaran and Anand G. Sadekar, both graduate students in chemistry.

On April 8, 2009. Posted in Department of Chemistry, Research, Top Headlines