Kirk Lawrence, a professional actor who recently played Sweeney Todd to sold out audiences in Genesius Theatre in Reading, Pa., will join Missouri S&T’s Miner League Theatre Players in their production of the musical thriller “Sweeney Todd: The Demon Barber of Fleet Street” next week. 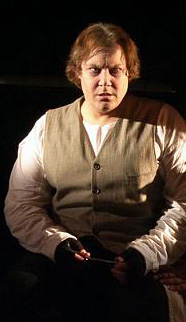 “The student who originally played Sweeney needed to get back to his class work, leaving some big shoes to fill in the title role,” says director Jeanne Stanley, assistant professor of theater at S&T. “He is an amazing actor, but school must come first at Missouri S&T.”

Because finding another student to learn the part a week before opening was unrealistic, Stanley and others sent a casting call to theaters and friends throughout the country.

“Mr. Lawrence came highly recommended, and we believe he will be a great solution to our dilemma,” says Stanley. Stanley says the students are somewhat apprehensive about working with a professional, but she is confident they will enjoy working with Lawrence.

“Not only is he incredibly talented, but he has a great sense of humor and is excited about working with the students.”
Lawrence will fly in tomorrow and get right to work. He knows the director’s vision and the difficult score, and Stanley believes he will add much to the show. “Trite as it is, the show really does go on.”

Admission is $10 for adults and $5 for students age 16 and older. The show contains adult situations and language and is not suitable for children under age 16. Tickets are available between 9 a.m. and 4 p.m. Monday through Friday and one hour before each performance in the Leach Theatre Box Office, located in Castleman Hall.

Additional information about the performance is available online at performingarts.mst.edu/theatre/current.html.