‘The Spencers: Theatre of Illusion’ to return to Leach Theatre 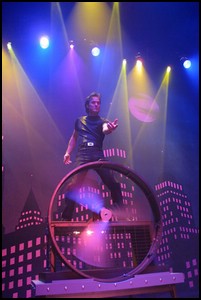 Magicians Kevin and Cindy Spencer performed at the theater in 2006 in one of the Family Series’ most popular shows. They have earned the reputation as one of the most highly regarded acts in magical entertainment and one of the most sought-after illusion teams in the business.

“The Spencers have taken the art of illusion to an entirely new level by infusing it with all the emotional dynamics of good theatre,” says a reviewer from the St. Louis Post Dispatch.

Tickets are $15 for adults and $10 for youths age 18 and younger. Missouri S&T students can charge their ticket to their student account.

The performance is funded in part by Phelps County Bank and the Missouri Arts Council.

Tickets are available at the Leach Theatre Box Office and may be purchased with a credit card by phone at 341-4219. All sales are final; however, tickets may be returned 24 hours prior to a performance for a tax deductible contribution to the theater.

The Leach Family Series offers a $1 discount each for purchases of four or more tickets to any of the four performances.
For more information, call the Leach Theatre Box Office at 341-4219.