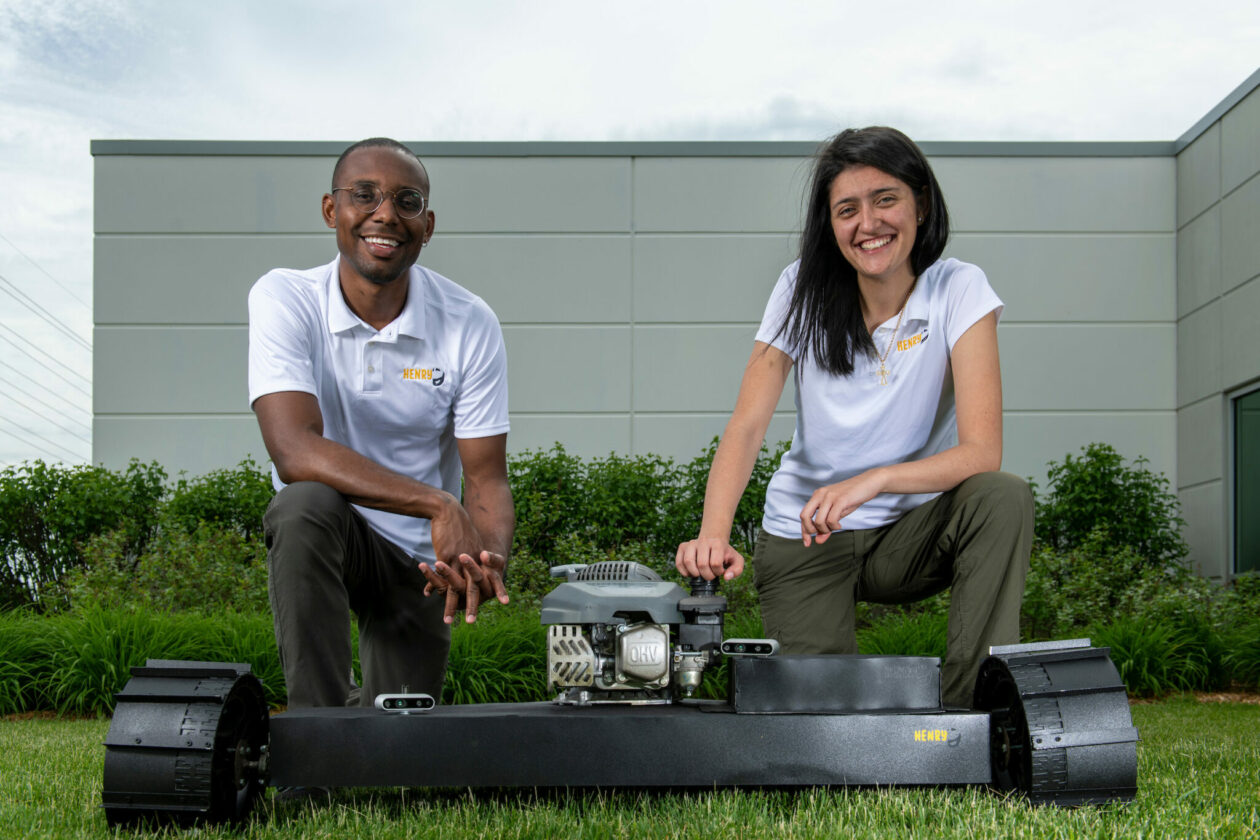 Mowing neighborhood lawns is a common summertime ritual for teens looking to earn some money. George Leno Holmes Jr. was one of those teens.

The two-time Missouri S&T mechanical engineering graduate spent many St. Louis summer days mowing with his grandfather, Leno Holmes, who would pick him up at 6 a.m. for a full, grueling day of cutting grass.

The money was nice, but Holmes’ allergies made the job difficult. “To be quite honest,” he says, “it was miserable.”

Driving his grandfather’s riding lawn mower, Holmes would imagine an army of robotic machines doing the job faster and more efficiently than he and his grandfather ever could.

The two Missouri S&T graduates formed Hire Henry, a company that aims to automate the landscaping business by equipping heavy-duty yet compact mowers with robotics and artificial intelligence to handle the hot, sweaty task of lawn care.

“Our goal was to take a job that previously required one person to sit on one riding lawn mower in the hot sun for 10 hours a day, and transform it into a job where one person can manage 10, 15, 20 different mowers, all from the comfort of a laptop or phone screen,” Holmes says.

Their idea has caught the attention of investors. Last December, Hire Henry was one of six startups to win $50,000 in funding through the University of Missouri-St. Louis’s Diversity, Equity & Inclusion Accelerator, part of the UMSL Accelerate initiative. Holmes and Bonnett earned additional support by winning the 2021 Alphalab Gear Hardware Cup pitch competition. They continue to seek funding through other sources.

Holmes earned a bachelor of science degree in mechanical engineering from S&T in 2016 and completed his Ph.D. in 2020. He says the S&T undergraduate experience helped fuel an interest in entrepreneurship, and his Ph.D. journey led him to a business partnership with Bonnett.

Holmes laid the groundwork for Hire Henry through S&T’s Technology Transfer Entrepreneurial Internship and Cooperative Education Program, which provided funding and other support to help students start their own business. Through the program, Holmes interviewed owners of 50 commercial landscaping companies throughout Missouri to learn their needs and gain feedback into his idea for creating a heavy-duty landscaping mower. During his doctoral studies, Holmes took part in the U.S. National Science Foundation Innovation Corps (I-Corps) entrepreneurial education program, which allowed him to contact even more landscaping companies.

Time after time, owners would lament how difficult it was to find employees – a challenge Holmes and Bonnett believe Hire Henry can address.

A native of Bogota, Colombia, Bonnett came to the U.S. at 16 to pursue her dream of playing basketball. She attended Life Preparatory Academy in Wichita, Kansas, and after graduation enrolled in Metropolitan Community College Penn Valley in Kansas City, Missouri. She transferred to Missouri S&T in 2017 and played on the S&T women’s basketball team for two seasons. She earned her B.S. in mechanical engineering in December 2020.

“Our paths crossed multiple times,” Bonnett says of Holmes, as they had mutual friends on campus. As she worked on a programming problem one day in a Toomey Hall common area, Holmes dropped by and struck up a conversation about undergraduate research. That chance encounter led Holmes to recruit Bonnett to Hire Henry.

“I promised myself that I would never program again in my life” after finishing that computer science course, Bonnett says, “but George lured me into robotics.”

Holmes set up a research project for her and two other undergraduate students. In a Toomey Hall lab, they used 18 high-speed cameras capable of tracking motion to the millimeter level to study the movements of a prototype robotic mower. They wrote custom software to gather and process the data from the machine’s movements. The research helped Holmes and Bonnett further refine the technology for more accurate movement of a mobile research robot.

Holmes and Bonnett agree their serendipitous business partnership points to some valuable lessons for S&T students.

“The folks you meet on campus are very smart, and you never know where the connections you make at S&T will lead,” Holmes says.

Bonnett says to remain open to unexpected possibilities. “I was so impressed with George, and with his knowledge about robotics and artificial intelligence,” she says. But until she learned more about the challenges facing the landscaping industry, she questioned his plans.

“I thought he was crazy,” she says. “A Ph.D. focused on cutting grass?”

“There is a lot of capital available to startups right now,” says Holmes, adding that the Jumpstart Our Business Startups (JOBS) Act, signed into law in 2012, helps companies raise money through equity crowdfunding.

“I never thought I could start a business right out of school,” Bonnett says. “Playing basketball, I learned a lot about teamwork, and that’s important for a new company. I think George and I make a great team.”

Why is the company called Hire Henry? There are a few reasons. But the most important to its founders is Hire Henry’s allusion to the hero of the folklore ballad “John Henry,” the “steel-driving man” who won a contest against a rock-drilling machine that ultimately cost him his life. Bonnett suggested the name as an homage to John Henry.

He and Bonnett believe Hire Henry will transform the landscaping business just as AirBnB has the hospitality industry.

5 thoughts on “Changing the landscape”