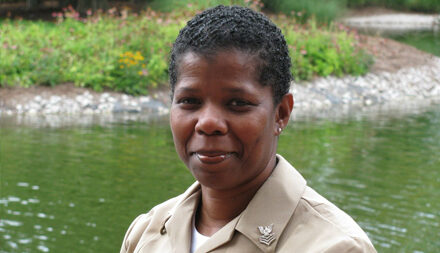 In the face of dire circumstances that most of us have not experienced, Bond completed her master of science degree in industrial-organizational psychology in December 2020 and was selected as one of three Missouri S&T graduation speakers.

Bond spent 34 years in the U.S. Naval Reserves where she was a combat medic and a bio-medical equipment repair technician and continues to serve as a hospital corpsman and unit leader. After her last deployment to Landstuhl, Germany, where she cared for wounded and injured troops, Bond returned home with injuries. Eventually, she reintegrated into civilian life and returned to her work as district-wide coordinator of veteran’s affairs at the St. Louis Community College Cosand Center.

Always an advocate for education, Bond’s ongoing message to young people is to pursue a degree of higher education. All of her children pursued or completed their degrees, except her youngest son, Collin, who she described as a free and independent spirit.

In 2017, Bond enrolled in Missouri S&T’s graduate psychology program only to learn shortly before classes started that she had a rare, aggressive form of cancer. She decided to push on, not wanting to let the disease dictate her life.

With the chemotherapy and surgeries that followed, during her coursework Bond said she often asked herself, “What was I thinking?” But Missouri S&T’s faculty supported her and gave her the time she needed to complete assignments.

During this period, Bond’s father died, and she began supporting her widowed mother.

Bond’s cancer spread to a Stage IV category. She faced more treatments and the reality that she might not live as long she had imagined. Still, her professors encouraged her to push on to finish what she had started.

After witnessing his mother’s perseverance, Collin decided to enroll in college. The two made a pact to stay in school together to keep each other focused until they completed their degrees. Then, unexpectedly in April 2020, Collin collapsed during a basketball game and died.

Bond says she was devastated. To stay busy, she enrolled in Missouri S&T’s summer session, drawing on the strength of Collin’s memory to keep herself going. Bond says fulfilling her promise to Collin kept him alive—when she didn’t think she could finish her program, she said she could hear him saying, “Mommo, you got this!”

In spite of her circumstances, Bond was delighted to be graduating on her father’s birthday.

In her speech to the S&T graduates, she emphasized that having what people say defines success is nothing without the support of those who believe in you.

“Without my faith and the support of my wonderful husband, family, the S&T faculty and the disability services of the Miner Access staff, I’m not sure I could have realized this item on my bucket list,” says Bond.

“Thank you S&T for helping me reach the end of this chapter in the book called ‘my life’ and helping me make good on my promise to Collin,” Bond says.