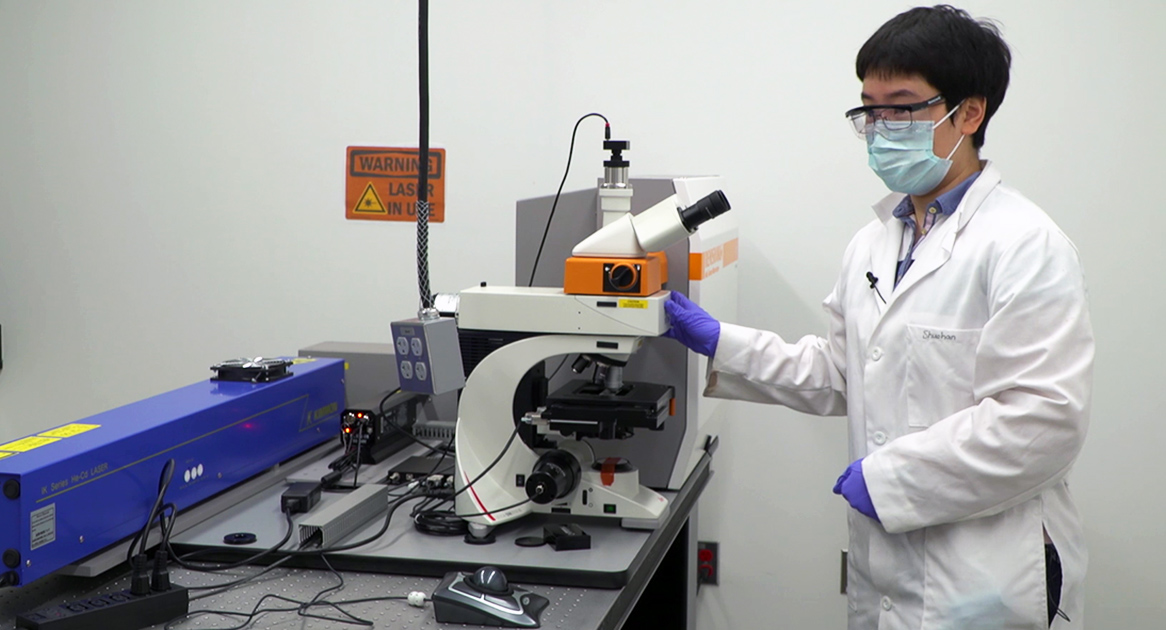 Shuohan Huang (shown), a doctoral student in chemistry, and Dr. Vadym Mochalin, associate professor of chemistry, are the first to document the gaseous products of MXenes’ reactions in aqueous environments. The researchers used S&T’s new multi-wavelength Renishaw InVia confocal microspectrometer in the study published in the journal ACS Nano.

A new finding about the fundamental chemistry of two-dimensional materials called MXenes will change the way researchers work with them, and open up new areas of applications, according to researchers at Missouri S&T.

MXenes are ceramics that make up one of the largest families of 2-D conductive materials. Their conductivity makes them candidates for use in energy storage, sensing and optoelectronics. According to the nanosciences information portal Nanowerk, what makes MXenes so interesting is that the materials could conceivably consist of any of millions of possible arrangements of transition metals (like molybdenum or titanium), carbon and nitrogen.

Out of these myriad potential arrangements, only a few dozen have been synthesized so far. This is largely because the number of synthetic approaches to MXenes is limited by lack of understanding the chemical properties of the materials, says Dr. Vadym Mochalin, associate professor of chemistry at Missouri S&T.

Mochalin and Shuohan Huang, a chemistry doctoral student in Mochalin’s group at Missouri S&T, are the first to document the gaseous products of MXenes’ reactions in aqueous environments.

“Our experimental findings open up a new area of chemistry of 2-D transition metal carbides and carbonitrides,” says Mochalin. “By showing how significantly different the chemistry of MXenes can be compared to their bulk analogs, we provide essential information to researchers who will now design their MXene synthesis, storage and processing strategies differently.”

Mochalin says that knowledge of how MXenes interact with water is one of its fundamental chemical properties. It is important to understand in applications, especially in catalysis and sensing where the materials will have environmental exposure, he adds.

“Inorganic chemistry textbooks teach that transition metal carbides can sustain exposure to water, as well as aqueous acids or bases, without a reaction in ambient conditions and are generally good examples of chemically stable materials—which still holds true for bulk carbides,” says Huang. “But since MXenes became available in 2011, researchers have applied the same hypothesis to the 2-D forms of these carbides, which we now know is no longer true.”

The researchers used Raman spectroscopy and gas chromatography for the first time to analyze the composition of gases evolved in MXene reactions with water. Their findings are published in the journal ACSNano in a paper titled “Understanding Chemistry of Two-Dimensional Transition Metal Carbides and Carbonitrides (MXenes) with Gas Analysis.”