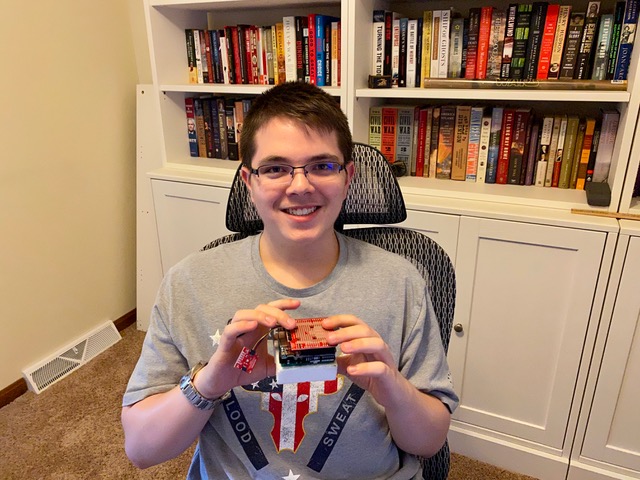 Christopher Moore, a “Space: The Final Frontier” camper, with his satellite prototype. Photo submitted by the Moore family.

Missouri S&T’s first virtual summer camp will conclude with a launch event to watch more than a dozen camper-built small satellites travel 100,000 feet into the air on-board a high-altitude balloon. Campers will track the flight in August and receive images and data captured by the satellites from the edge of space.

S&T’s “Space: The Final Frontier” virtual camp, held July 12-16, challenged students with hands-on work to design, build and fly a small satellite. The campers, all rising 10th, 11th and 12th graders, used provided materials to construct small spacecraft. The craft were then sent back to the S&T campus and will be launched on a high-altitude balloon in early- to mid-August, weather permitting. Throughout the camp week, video lessons included satellite building and testing instructions, virtual laboratory tours and interviews with aerospace engineering faculty and current S&T students.

“These were some great campers, and I was really impressed with their work throughout the week and their engagement with the material,” says Dr. Jillian Schmidt, camp director and assistant teaching professor of mechanical and aerospace engineering at S&T.

Organizers say that the feedback they have received from parents and campers gives them confidence that the virtual event was a fruitful experience for the students.

“I heard from multiple campers and parents who were very appreciative to have a camp experience that went virtual instead of canceling completely,” says Schmidt. “In some cases, it sounds like the whole family got to learn and take part in the activities. So hopefully we reached an even wider audience than usual.”

Missouri S&T decided to move several of its pre-college summer camps to a virtual format for 2020, due to continuing COVID-19 concerns. The other two camps still ongoing are “Jackling Intro to Engineering” and “ASM Materials.” All camps include a combination of online interaction with hands-on activities and challenges the campers do from their homes. No in-person, on-campus summer camps will be held this year at S&T.