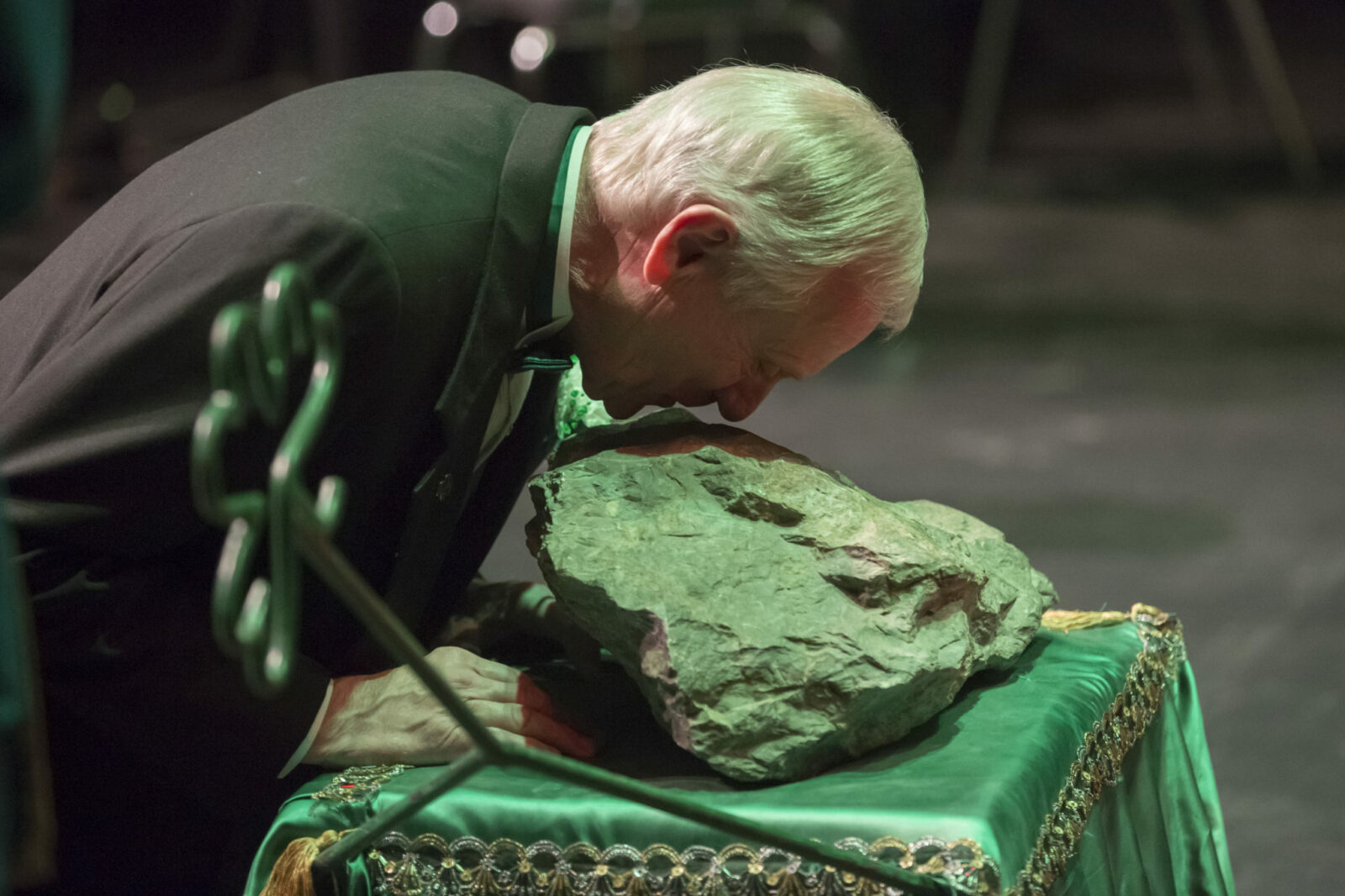 NOTE: Due to concerns related to coronavirus, all St. Pat’s events have been canceled.

The St. Pat’s Board at Missouri S&T has announced that Kevin and Meg Brady will serve as Honorary St. Patricks and parade marshals for the 112th St. Pat’s celebration.

The new knights will be honored during a public coronation at 9 p.m. Friday, March 13, in Leach Theatre of Castleman Hall on the Missouri S&T campus.

The Honorary Knights will also be a part of the 2020 St. Pat’s Parade, which begins at 11 a.m. Saturday, March 14, on Pine Street in Rolla. Biographical information is as follows:

Kevin Brady of Rolla, Missouri, is senior finance and accounting manager in student affairs at Missouri S&T, where he guides the budget and fiscal operations for the division and advises the S&T BBQ Club on campus. He is also the former advisor for Theta Tau, now known as the Fraternal Order of Leaders. Brady earned bachelor degrees in both accounting and finance from Missouri State University and an MBA from Lindenwood University. He was named an Honorary Knight of St. Pat in 2005, along with his wife, Meg. Brady attended S&T as an undergraduate student and his familial S&T ties include: his father Stan Brady who earned a bachelor of science degree in metallurgical engineering from S&T in 1949; his wife Meg is an alumna; his daughter Lauren earned a bachelor of science degree in psychology from S&T in 2008; and his son Mitchell, a 2017 St. Pat’s Court student member, earned a bachelor of science degree in engineering management from S&T in 2019.

Meg Brady of Rolla, Missouri, is retired senior director of global learning at Missouri S&T. Brady served S&T for over 36 years, holding positions in information technology, global learning and the Center for Faculty Excellence (CAFE). While at S&T, she helped establish the first IT help desk on campus staffed 24-hours a day by students, served as advisor to Lambda Sigma Pi for nearly 30 years, earned a staff excellence award and was the recipient of the 2018 Women’s Advocate of the Year Award. In 2007, Brady established the educational technology department on campus, which specialized in directly supporting faculty in teaching with technology. Brady earned a bachelor of science degree and master of science degree in computer science from S&T in 1983 and 1989, respectively. She also taught courses for the computer science department in the 1990s as an adjunct faculty member. Her father, Don Sparlin, is a professor emeritus of physics at S&T who served for over 30 years and then taught as an adjunct in S&T’s mathematics and statistics department another 14 years after retiring.

Maurice B. Graham of St. Louis, is president of the law firm Gray, Ritter & Graham, P.C., which focuses on business and commercial litigation, and catastrophic injury and death cases. Graham also serves on the University of Missouri Board of Curators, after being appointed in 2015 by Missouri Gov. Jay Nixon. Graham is a past president of the Missouri Bar, the St. Louis Bar Foundation and the University of Missouri Law School Foundation. He has also served as a member and chair of the Supreme Court Advisory Committee, which oversees attorney discipline in Missouri. He is a Fellow of the American College of Trial Lawyers, the International Society of Barristers, the International Academy of Trial Lawyers, the Missouri Association of Trial Attorneys, the American Association for Justice and the American Trial Lawyers Association. Graham attended Central Methodist University and earned both his bachelor’s degree and juris doctorate from the University of Missouri. He and his wife, Edna Mae, enjoy the outdoors – the couple rode the Katy Trail bike route across the state of Missouri six different times.

Dr. Chris Maples of Portland, Oregon, is the interim president of Pacific Northwest College of Art in Portland. Prior to his current position, Maples served as interim chancellor at Missouri S&T from May 2017 to July 2019. A U.S. Army veteran and Defense Language Institute alumnus, Maples earned his Ph.D. from Indiana University in 1985. He spent most of his research and teaching career at the Kansas Geological Survey at the University of Kansas in Lawrence, Kansas, and as the department chair of geological sciences at Indiana University. He discovered his love for helping others succeed while serving as program director for several programs at the National Science Foundation in the mid-1990s. At Missouri S&T, he and his wife, Sara Marcus, hosted numerous events in the chancellor’s residence, where they introduced everyone to their three cats, the innermost parts of the house and their love of the Oxford comma.

Sara Marcus of Portland, Oregon, is a geologist and paleontologist and a scientific and academic editor, proofreader, and copyeditor. While living in Rolla with her husband, interim chancellor Dr. Chris Maples, she hosted numerous events at the Chancellor’s Residence at Missouri S&T, volunteered with Coterie, Kaleidoscope, Celebration of Nations, Rolla Rockets and the Rolla Library board, as well as at many campus events. Sara enjoys skiing, roller derby, reading, and strategic planning and communications for non-profit groups. She and her husband currently live in Portland with their three cats, Ducky, Izzy and Artie, who all love the Oxford comma.

Dr. Susan Murray of Rolla, Missouri, is the department chair and professor of psychological science at Missouri S&T. Murray joined the Missouri S&T faculty in 1994. She earned her Ph.D. in industrial engineering from Texas A&M University. Murray has received numerous awards from the university including outstanding teaching awards, faculty excellence award, the woman of the year award and induction to S&T’s Women’s Hall of Fame. Before coming to Rolla, she worked in the aerospace industry, including two years at the Kennedy Space Center. She and her wife, Julie Murray, have two children, Jack and Dace. Dace held the position of Page in a prior St. Pat’s Court. In 1992, Murray kissed the blarney stone in Ireland while traveling with her mother to visit their ancestral homeland.

Richard Myers of Newburg, Missouri, is a program coordinator in international affairs at Missouri S&T. In his current position, Myers serves as committee leader for Celebration of Nations in Rolla and collaborates with various departments to support S&T events such as International Women’s Day, Earth Day, International Student Week, International Day of Peace and other community and school outreach programs. Prior to joining S&T in 2006, Myers was co-owner of the Blue Heron Rookery Performance Café and Art Gallery and served as a manager for Grellner Sales and Service. He has received numerous awards from the university including the Student Council Diversity Recognition Award, International Student Club award of Appreciation, Outstanding Contribution to Saudi Night Event and African Student Association Award of Appreciation, as well as earning the Rolla Chamber of Commerce Annual Achievement Award. His wife, Luce Myers, is a lecturer in the arts, languages and philosophy department at Missouri S&T. They are members of Limited Addition Band, a local folk band that presents environmental education programs to local schools.

Doug Roberts of Rolla, Missouri, is University Police chief and director of police and parking operations at Missouri S&T. Roberts has served as chief since June 2016. Prior to joining Missouri S&T, he was the assistant agent in charge of the United States Secret Service in St. Louis. Roberts worked for the Secret Service for more than 25 years, including assignments in Missouri, Washington D.C. and Texas. Prior to the Secret Service, he was a tactical response officer with the Kansas City, Missouri, police department. Roberts earned a bachelor’s degree from Park University in Kansas City and a master’s degree from the University of Central Missouri, both in criminal justice administration. He has earned several awards during his career, including the Rolla Police Department’s Police Chief Spadoni Award, a Staff Excellence Award at S&T, the Secret Service’s Distinguished Service Award for Service on September 11th, 2001, two Director’s Life Saving Awards, and St. Louis Area Executive Board Supervision Award. Roberts and his wife, Becky, have three grown children, Ben, Zach and Katie, and one grandchild, Libby Roberts. When not working, Roberts enjoys exercising, playing with the family dog Mocha and spoiling his granddaughter.

Larry Stratman of Rolla, Missouri, is a Phelps County Commissioner currently serving his fourth term. Stratman spent more than 25 years in the insurance business before running for office in 2004. During his time in office, he has represented the people of Phelps County on more than 35 boards or committees. His service includes forming the board that helped the City of Rolla build the Westside Marketplace and forming the first Emergency Services Board that brought unified emergency services to Phelps County. Stratman earned a bachelor of science degree in economics from Missouri S&T in 1978. He also owns the University Book & Supply, a bookstore in Rolla, which hosts the annual St. Pat’s sweatshirt design “unveiling” ceremony. He and his business partner, Mike Greenway, an Honorary Knight in 2016, own one of each St. Pat’s sweatshirt since their introduction in 1963. Stratman is married to Chris Lavino Stratman, and they have one daughter, Jaymie Greenway, who earned a bachelor of arts degree in multidisciplinary studies in 2018, and a son-in-law Mike. Stratman has four grandchildren, past St. Pat’s Court coronation pages Jack and Maddie and past coronation crown bearer Sam and baby Cal.

John D. Wiggins of Rolla, Missouri, is member of the Missouri Judiciary, serving as senior judge. After earning a bachelor of arts degree in history from Missouri S&T in 1970 and a juris doctorate from the University of Missouri in 1973, Wiggins practiced law in Rolla until his election as circuit judge of the 25th Judicial Circuit in 1990. He retired from the active bench in 2004 and became a senior judge in 2009. During his career, Wiggins also served as Rolla city attorney, Rolla city counselor, Phelps County prosecuting attorney and was a member of the Rolla Board of Public Works. In 1995, he received an award of professional distinction in history and political science from Missouri S&T. In 2016, the Phelps County Bar Association established a Mentorship Award in his honor. In 2019, Wiggins received the ICON Award, presented by Missouri Lawyers Media in recognition of an exemplary career and longstanding commitment to the Missouri legal community. Wiggins served for several years as an adjunct instructor of constitutional and business law at S&T and is a member of the Order of the Golden Shillelagh. He and his wife, Jan, have a dachshund named Gunnar.