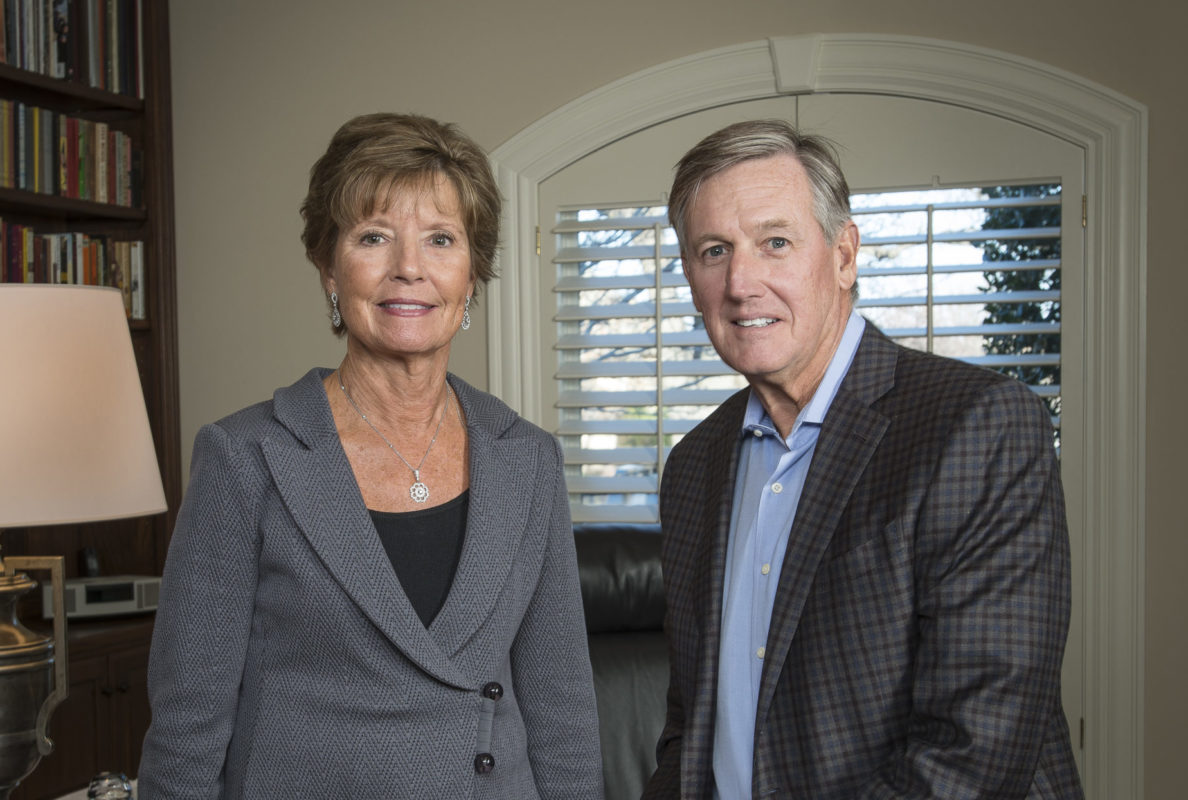 Missouri S&T alumni John Gibson and Kristie (Capps) Gibson have transformed Miner Athletics over the past two years with a series of gifts and pledges totaling $6.4 million. Photo by Rick Ayre/Missouri S&T

Missouri S&T alumni John Gibson and Kristie (Capps) Gibson have transformed Miner Athletics over the past two years with a series of gifts and pledges totaling $6.4 million. The largest individual donors to the university in the past decade, they continue to champion S&T student-athletes in competition and in the classroom.

Their recent pledges of $5 million in support of athletics and $400,000 for locker room renovations come after a gift of $1 million in 2017 to renovate the arena that serves as home court for the university’s NCAA Division II men’s and women’s basketball and women’s volleyball teams.

“John and Kristie Gibson’s generosity has done so much to support our student-athletes as scholars and competitors,” says Missouri S&T Chancellor Mo Dehghani. “From their years as Rolla undergraduates to the opportunities they have created for current and future students, the Gibsons embody Miner pride.”

Gibson Arena in the Gale Bullman Building was dedicated in November 2018 during halftime of a men’s basketball game. Arena renovations included new flooring, goal systems, a public address system and acoustics. The Gibsons were also major donors to the Miner Dome dedicated in 2010 and the artificial turf installed on the stadium and intramural fields in 2014.

“John and Kristie have been members of the Miner family for nearly 50 years,” says Vice Chancellor for University Advancement Joan Nesbitt. “We are blessed that two aspiring engineers, one from a small town in southeast Missouri and the other from Kansas City, found their way to Rolla. They have been making a difference on our campus ever since.”

John and Kristie met as Rolla undergraduates in the early 1970s. John was a transfer student from Kansas City Kansas Community College and a member of the Miner basketball team. Kristie was a scholarship student from Dexter, Mo. They married during their senior year, graduated together in 1974 with bachelor of science degrees in engineering management, and joined Exxon Company USA in Baytown, Texas as refinery engineers. They later worked for Phillips Petroleum Co. — John in the natural gas, natural gas liquids, and exploration and production divisions, and Kristie as a process engineer, gas buyer and manager of the natural gas supply division before she retired in 1986.

“I have always valued my experiences at Rolla and especially the education I received,” says Kristie. “It served me well throughout my career in industry and I hope, by my example, I perhaps inspired other young women to pursue the engineering profession.”

John became executive vice president of Houston-based Koch Energy in 1995 before being name president of energy for ONEOK, a $25 billion Fortune 500 company based in Tulsa, Okla., in 2000. He became chairman, president, and CEO of ONEOK and ONEOK Partners in 2007 and served in these roles until his retirement in 2014. He continues to serve as non-executive chairman of both ONEOK and ONE Gas, a natural gas utility.

He is a former member of the S&T Board of Trustees, a member of the Academy of Miner Athletics, and a recipient of the Miner Alumni Association’s Alumni Achievement Award and the Great Lakes Valley Conference’s Dr. Charles Bertram Alumni Award of Distinction.

“My athletic experience was a major contributor to the formation of my personality and values,” says John. “I’ve always admired the university for making the intercollegiate athletic experience available to as many students as possible. Kristie and I want S&T players to have the best possible experience as athletes and students.”

Missouri S&T ranks fifth on the all-time list of intercollegiate athletes who have been honored as NCAA Division II Academic All-America team members. S&T’s intercollegiate teams include men’s baseball, basketball, cross country, football, golf, soccer, swimming, and track and field, and women’s basketball, cross country, golf, soccer, softball, track and field, and volleyball. “John and Kristie have been tremendous supporters of our program,” says S&T Director of Athletics Mark Mullin. “The impact of their gifts is immediate and long-lasting. We talk to our student-athletes regularly about being ‘Miners for life.’ John and Kristie exemplify that creed and are incredible role models for our student-athletes. Words cannot express the appreciation we have for their generosity.”

One thought on “Missouri S&T alumni John and Kristie Gibson champion Miner Athletics with gifts of $6.4 million since 2017”