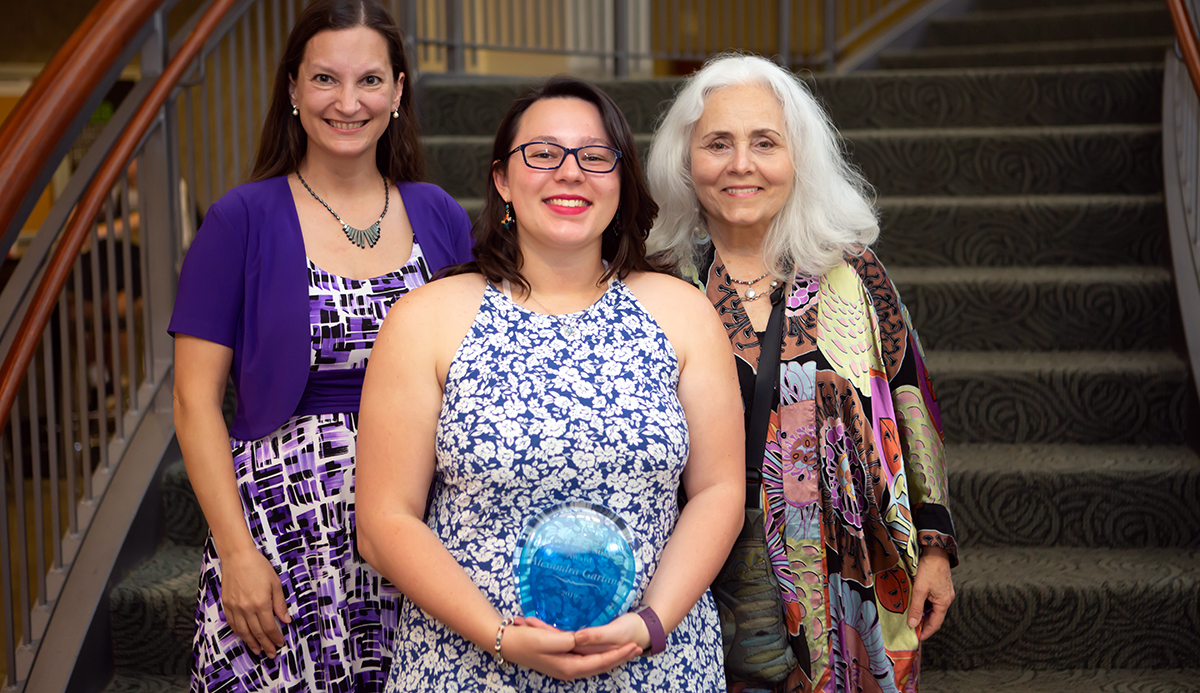 Alexandra Garland, a graduating senior in geological engineering from Breese, Illinois, has earned Missouri S&T’s 2019 Renaissance Student Award. Missouri S&T’s College of Arts, Sciences, and Business and the arts, languages and philosophy department presented the award, which included a $1,000 prize, in a ceremony on campus May 6 at the Havener Center.

The award is named after the term “Renaissance person,” originally coined to describe the great philosophers of the Renaissance and Enlightenment eras who were experts in numerous varied fields. The most well-known example is Leonardo da Vinci, who was a painter, sculptor, musician, mathematician, inventor and writer.

Garland achieved a 4.0 grade point average in her student career while assuming leadership roles in several student organizations. She is past president and current public relations chair of the Association of Environmental and Engineering Geologists where she earned a professional development grant and created visibility for the organization with her graphic designs. Garland served as fundraising chair and secretary for the Society of Women Engineers. She also put her skills and talents to work in the disciplines of visual art and music.

“Our winner received the second highest grade in the challenging course of Subsurface Hydrology,” says Dr. Katherine Grote, assistant chair and associate professor of geological engineering. “She excels in drawing, painting and sculpture. In music, she plays French horn in S&T’s Symphonic Band and was drum major, leading and managing 100 musicians in the Miner Marching Band. She also played in the Brass Choir and enjoys theater.”

“She is not only a talented musician, but an exceptional music leader,” says Dr. David Samson, assistant professor of music and director of Missouri S&T’s bands.

“I can say that the truth of these quotes permeates her work, her talent which she has fostered with hard work, her character and her presence on this campus,” says Luce Myers, lecturer of art at S&T. “We have no doubt that as Alexandra continues with her Ph.D. program in civil and environmental engineering at the University of Washington in Seattle and begins a career working with geotechnical engineering and machine learning, she will also continue to change the world with her mindful renaissance persona and the same inexhaustible engagement she invests in all facets of her life.”

The Renaissance Student Award committee presented Sara Johnson, a graduating senior in psychological science with a minor in Spanish from St. Louis, a certificate as runner-up for the 2019 Renaissance Student Award. Johnson has garnered many academic awards in her major, including Missouri S&T’s Psychological Science Outstanding Research Award and the Psychological Science G. Suzanne Olson Undergraduate Research Award, as well as two awards in the social sciences category from S&T’s Undergraduate Research Conference.

“Sara’s focus is extraordinary,” says Dr. Merilee Krueger, associate teaching professor of psychological science. “She has gone past simply learning in the classroom and has chosen to engage in psychological research that will be beneficial to other people.”

“Both of these are projects being submitted to peer reviewed journals, which will allow the impact of her research to be far reaching,”Krueger says.

Johnson has been involved in several S&T student organizations including Ballet and Dance Club, Omega Sigma, Eco Miners and PsyCo, as well as Psi Chi, the international honor society in psychology. She was head choreographer for two S&T dance productions, “Beauty and the Beast” and “The Wizard of Oz” and teaches at the Stonecrest Dance Center in Rolla.

“There is beauty to be recognized in human emotion and a sense of authenticity that is absent from a variety of other career and educational fields,” says Johnson. “Likewise, performing psychological research is like a well-rehearsed dance. It takes consistency, hours of preparation, teamwork, and above all, a creative idea. Not because it is superficial or fabricated, but research is like a well-orchestrated performance.”

On May 7, 2019. Posted in CASB Research, College of Arts, Sciences, and Business, Department of Arts, Languages and Philosophy, Department of Psychology, Geological Engineering