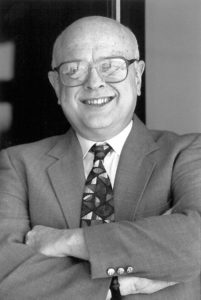 Donald G. Brackhahn, former executive director of the Miner Alumni Association, died Monday, April 1. He joined the S&T staff in 1985 and retired 2002. Brackhahn and his wife, Nancy, have been longtime supporters of S&T, the alumni association and Miner athletics.

Brackhahn taught social sciences and served as athletic director for the Kansas City (Missouri) Public School System for six years. In 1966, he became an alumni director at his alma mater, the University of Missouri-Kansas City, and in 1970, he was appointed director of development and alumni relations at UMKC. Brackhahn held bachelor of arts and master of arts degrees in history from UMKC.

Brackhahn was the first president of the UMKC Alumni Association, and in 1989 he received a presidential citation for his service to the university and his development efforts. In 1993, the Miner Alumni Association awarded Brackhahn honorary life membership, and in 1995, he was dubbed an Honorary Knight of St. Patrick. In 2000, Brackhahn was named one of UMKC’s Top 100 Innovators and Benefactors. Upon his retirement from S&T in 2002, the Chancellor’s Advisory Committee on African American Recruitment and Retention commended Brackhahn for his work to build ethnic diversity among alumni constituents.