Physics researchers have discovered a new way to control light — one that produces a concentrated, optically energetic laser beam when transmitted through diffuse media such as fog, biological tissue or white paint — rather than the typical weaker light with a lateral spread.

The discovery from researchers at Missouri S&T and Yale University has potential to make improvements in deep-tissue imaging and optogenetics, a technique which uses light to probe and manipulate cells in living tissue.

A study announcing the method appears in the March 4 edition of the journal Nature Photonics.

“It is commonly thought that one has little to no control over how light expands in diffuse media,” says Dr. Alexey Yamilov, theoretical lead for the research and an associate professor of physics at Missouri S&T. 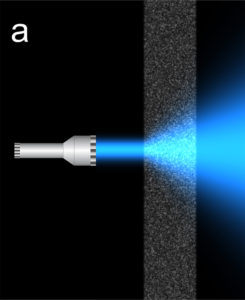 When a flashlight beam shines onto a strongly scattering medium such as white paint, the light diffuses in both longitudinal and lateral directions. The transmitted beam becomes wider and the intensity decreases. Image by Hasan Yilmaz.

“Typically, an optical beam propagating through a diffusive medium such as fog will spread laterally, but we have discovered that a special preparation of the laser beam can transmit all incoming light without lateral spread,” says Dr. Hui Cao, experimental lead of the research and the John C. Malone Professor of Applied Physics and Physics at Yale University. “This method will greatly enhance optical energy densities inside turbid media, which will be important for imaging through opaque media.”

During a 10-year-old collaboration to investigate the interplay between lightwave scattering and interference, the researchers turned to a study of transmission eigenchannels, which are wave patterns specific to a particular sample. Yamilov says the transmission eigenchannels concept was conceived in the 1980s to explain experiments with electron waves in small metal wires at very low temperatures. 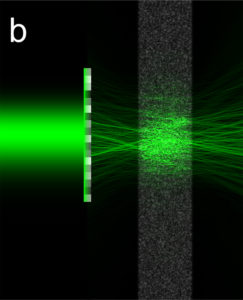 The direct demonstration of eigenchannels eluded researchers until 2016, when groups led by Cao and Yamilov were the first to detect eigenchannels in optics and report their observations in a 2016 paper in Physical Review Letters. They found that unlike an ordinary laser beam, which always weakens as it penetrates deeper, the eigenchannels can actually bolster the energy inside the system.

More than two years and countless simulations and experiments later, the team’s new findings on the unusual  properties of eigenchannels are documented in the March issue of the journal Nature Photonics in a paper titled “Transverse localization of transmission eigenchannels.”

The experiment required researchers to learn how light can be transmitted through a sample of zinc oxide nanoparticles and then generate special combinations of light waves to excite specific eigenchannels. Dr. Hasan Yilmaz and Dr. Chia Wei Hsu, postdoctoral associates in the department of applied physics at Yale, performed these experiments with the help of a spatial light modulator (SLM) and observed signatures of transverse localization, including enhanced lateral confinement and suppressed spreading of eigenchannels.

“This work demonstrates the advantages of studying wave propagation phenomena in optical systems and offers a glimpse of a wealth of undiscovered physics,” says Yamilov. “Our finding not only has applications in the field of optics, but also profound implications in condensed matter physics, acoustics, and other fields involving wave propagation and scattering.”