Posted by Delia Croessmann
On November 2, 2018

Renewable-energy-focused neighborhoods, like Missouri S&T’s EcoVillage (above), may become hubs of energy storage and exchange, thanks to research by a Missouri S&T Ph.D. student.

Members of Missouri S&T’s Microgrid Industrial Consortium want to use the microgrids to test advancements in lead battery energy storage for their potential use as a renewable energy source in communities of the future. Two homes occupied by students will be individually supplied with stored electricity from the systems, which run off charging algorithms from a 24-hour, cloud-based control system. 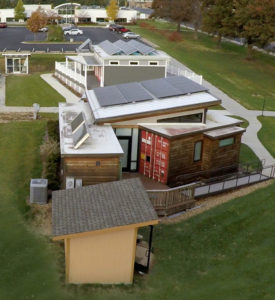 To celebrate the installation, Missouri S&T will hold a ribbon-cutting ceremony for the microgrids at 10 a.m. Friday, Nov. 9. The ceremony will begin with refreshments and short speeches in the lobby on the east side of the Technology Development Center at 900 Innovation Drive on the Rolla campus, then move to the EcoVillage for the ribbon cutting and tours of the homes. The public is invited.

ALABC members NorthStar Battery and EnerSys, both global battery manufacturers, and The Doe Run Co. donated the equipment and funding to construct the new microgrids.

Lead batteries are typically known as a tried-and-true rechargeable energy source. According to the ILA, up to 90 percent of modern lead usage is in the production of batteries. The ILA further states that more lead is produced by recycling than is mined, making it ideal for a circular economy. According to the 2017 National Recycling Rate Study commissioned by Battery Council International (BCI), lead batteries are the most recycled consumer product in the U.S. with a 99.3 percent recycling rate.

“With lead as a Missouri natural resource, this project provides opportunities to better serve our state’s economy and environment through energy research,” says Dr. Christopher G. Maples, interim chancellor. “This project perfectly aligns with S&T’s mission to integrate education, research and application to serve the state and solve the world’s great challenges.”

Dr. Mehdi Ferdowsi, director of Missouri S&T’s Microgrid Industrial Consortium and a professor of electrical engineering and computing, emphasizes that the new microgrid systems will allow researchers to explore the application of advanced lead batteries in stationary grid-tied applications, as most similar research to date has been with lithium batteries. “We’ll also be able to conduct research on potential peer-to-peer energy transactions that could result from this use — that is, the energy trading between consumers and ‘prosumers,’ those who both produce and consume the energy,” Ferdowsi says.

“Missouri S&T is at the forefront of microgrid research as an emerging technology solution to the infrastructure challenges facing aging electrical grids,” says Stephane Menand, director of S&T’s renewable energy, Solar Villages and microgrids research, operations and outreach. “Our living laboratories on campus offer full research and demonstration opportunities in this field.” 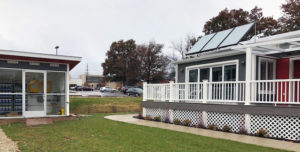 The EcoVillage homes were designed by S&T students who competed in the U.S. Department of Energy’s Solar Decathlon, and they draw about 1,000 visitors a year. The two homes powered by the advanced lead microgrids will run alongside four other solar homes exploring alternative technologies. The EcoVillage is the second grouping of student-designed solar homes. Missouri S&T’s first four entries in the Solar Decathlon constitute the Solar Village, located on 10th Street and Poole Avenue, across from the Gale Bullman Building.

“All of us involved in Missouri S&T’s Microgrid Industrial Consortium are tapping the potential of advanced lead batteries to create and convey the knowledge of how they will help meet the world’s need for renewable energy storage,” says Menand.

Other Missouri S&T Microgrid Industrial Consortium partners offer their thoughts on the project:

The project has a three-year timeline for research and study, and should be completed by 2021.