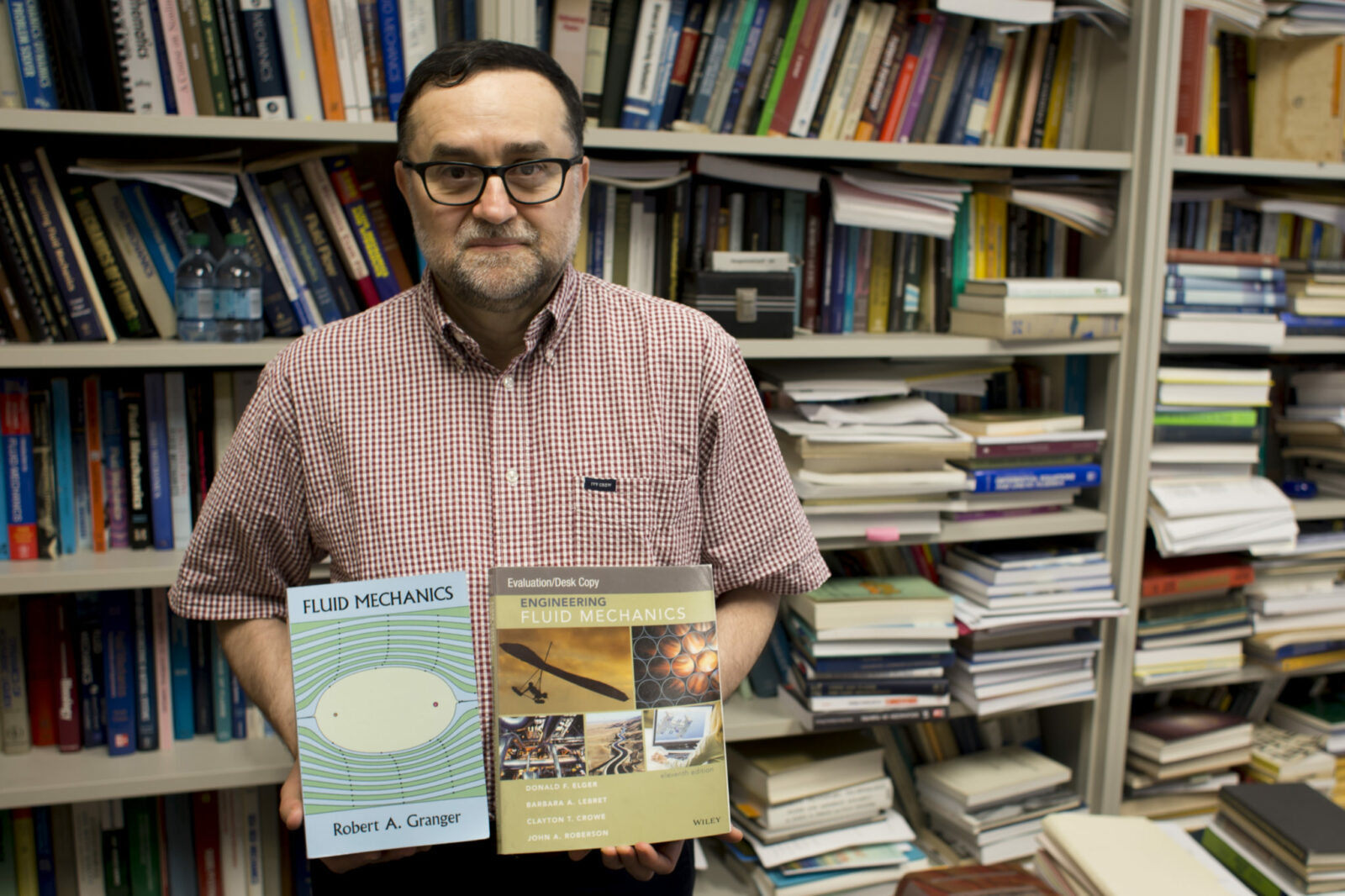 Dr. Cesar Mendoza with the original textbook for his civil engineering class (right) and the less expensive replacement (left) that he used this semester.

With the rising cost of college textbooks adding to many students’ debt load, the University of Missouri System is encouraging faculty to explore using more affordable and open educational resources – low-cost or freely accessible, openly licensed text or media for teaching and learning.

The UM System initiative – known as Affordable and Open Educational Resources, or AOER – has encouraged Missouri S&T professors to switch to less expensive or even free textbooks.

“Students feel that the books are just too expensive,” says Dr. Cesar Mendoza, associate professor of civil, architectural and environmental engineering at S&T. “There are semesters where some of them cannot afford them, especially those students that are self-supported.”

During the 2018 spring semester, Mendoza switched textbooks in his Civil Engineering 3330 class from a book that cost $145 to another text that cost $35. The class averages about 210 students every year, which means he saved students a total of about $23,000 annually.

“I wanted to do it because I do think the price of the textbooks was getting to be way too high,” says Mendoza. “This is one textbook, and let’s say the student is taking six courses. If they have to pay more than 100 dollars per textbook – that’s a lot of money.”

Mendoza switched to a publisher named Dover, which republishes books after their original copyright expires. His original textbook was out of print, but Dover started reproducing a soft-bound version with black and white illustrations. Mendoza says the quality of the content is still excellent, even without today’s textbooks with colorful illustrations and layouts. His students agree.

“I did appreciate Professor Mendoza’s change to the text since I feel that I still learned the material just as well as the more expensive option,” says Alex Schull, a senior in civil engineering from Washington, Missouri. “I think if two books have the same educational value presented in them that the cheaper option should be used. I don’t see any reason to use the more expensive option.”

Several S&T professors even switched to free online textbooks to save their students money.

“I noticed that some students weren’t even purchasing required textbooks because of the prohibitive cost,” says Dr. Jessica Cundiff, assistant professor of psychological science. “With the online textbook, the cost was free for students. The online textbook also allowed me a lot of flexibility as an instructor because I could pick and choose which chapters and topics to include – it was much more customizable than a traditional textbook.”

Erica Dixon, a senior in economics from Shelbina, Missouri, says she started choosing classes based on her options for less expensive textbooks. She was pleased to find S&T professors working to reduce the cost of their books.

“My econ professor talked to the publishing company and the S&T Bookstore. The original textbook normally costs around $300,” says Dixon. “Professor (Mahelet) Fikru was able to get exactly the number of chapters needed for the course. It felt nice to use a complete textbook for the first time. It helps that it was some change shy of $16 with tax.”

The book used in Fikru’s economics class was out of print, but the university publishing system was able to secure permission from the publisher to photocopy the text. It dramatically reduced the cost of the book.

“I had some students who were not able to buy the previous $300 book,” says Fikru, an associate professor of economics. “I think if faculty can find a less expensive option which gives students the same quality of education, then, why not go for it?”

More faculty are considering ways to do just that.

“There will be some classes that don’t have those freely accessible resources available,” says Mendoza. “They should try at least to find cheaper ways to access to the resources. It certainly would help the pocket of the students and their families.”