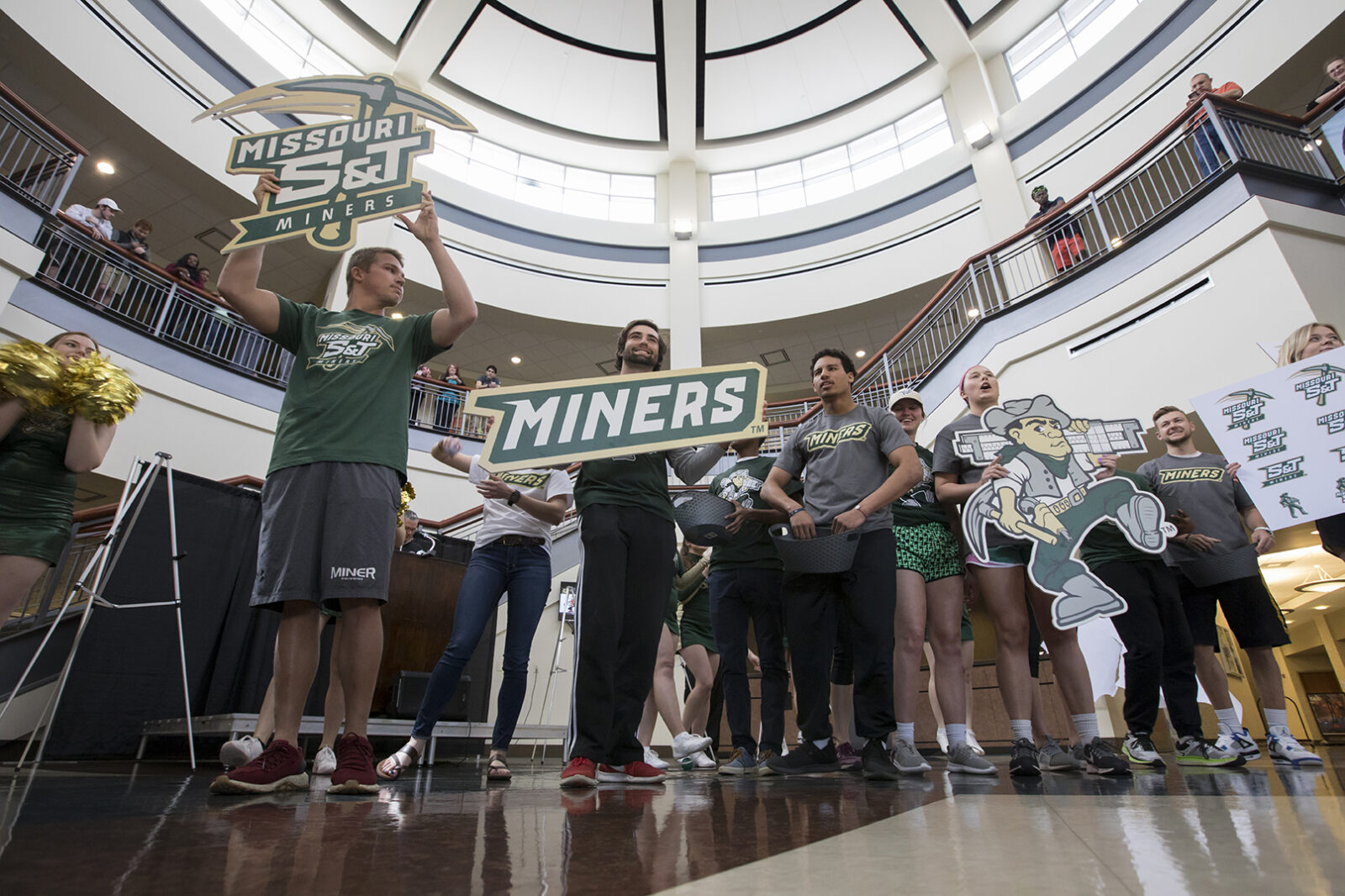 The refreshed identity is the result of a five-month process in collaboration with the university’s marketing and communications department. Athletics director Mark Mullin and interim Chancellor Christopher G. Maples joined S&T students, coaches, faculty and staff to showcase the new identity during an event held at noon Wednesday in the Havener Center atrium on campus.

The marks convey the qualities for which the Miners stand – scholarship, leadership and sportsmanship, says Mullin.

In addition to the new marks, the university has introduced an updated athletics color palette that uses a forest green and a true gold with a metallic equivalent. The darker green provided a more dignified and powerful look and contrasts nicely with the true gold. In addition to their use in athletics, these colors will be added to the university’s overall color palette.

“The initial reasons for developing the updated visual identity were very practical,” says Mullin. “The athletic mark was created in 2008 as a part of our university’s name change, but it did not translate well on athletic uniforms. We also lacked the variations needed to implement branding across all mediums. While updating our identity was a pragmatic decision, we took advantage of this opportunity to create a visual identity that feels more representative of our athletics program.”

Groups of student-athletes, coaches and staff worked with athletics branding company Rickabaugh Graphics to develop the refreshed identity. The creative work was completed without any direct cost to S&T, paid for by revenues received through the university’s licensing program.

“This new system gives teams variety and flexibility to represent Missouri S&T and keep our brand consistent in any situation or application,” says Mullin. “We’ll have better brand recognition thanks to a more unified graphic system.”

The new marks are exclusive to Missouri S&T athletics and recreation.

The rollout for the updated athletic logo, typography and spirit marks will occur in stages on the athletics website, social media channels and apparel, as well as in the new Gibson Arena, which is set to be completed in August 2018. Gibson Arena is named in honor of alumni John and Kristie (Capps) Gibson, whose recent $1 million gift to S&T athletics supported major renovations to the arena in the university’s Gale Bullman Building.

Because changes in uniforms occur at regularly scheduled intervals, the new look will be transitioned to every team over time. Eventually, all programs will showcase consistent logos and colors as outlined in an identity guide, which will be introduced this summer. Athletic facilities will be updated with the new visual identity over time and as budgets permit.

A celebration event is planned when students begin arriving on campus this fall.