Meg Brady, a senior director in global learning at Missouri S&T, has been named the 2018 recipient of the Dr. Elizabeth Cummins Women’s Advocate Award at Missouri S&T. She was honored during a campus ceremony on Wednesday, April 18. 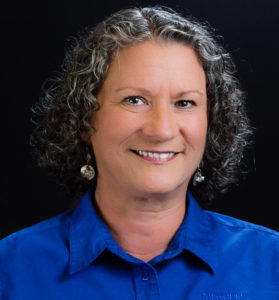 The award is given to any Missouri S&T employee, regardless of gender or job designation, that demonstrates commitment to the women on campus through mentorship and advocacy and by setting an example through professional achievement. As part of the award, Brady received a $1,000 stipend funded by Missouri S&T graduate Cynthia Tang, founder and former chair of Insight Industries Inc.

“Meg has long exemplified a level of commitment to women on campus through advocacy that should serve as a model for others,” wrote one colleague. “She has been aggressive in ‘giving back’ to the institution, its community and its partnerships.”

Brady, who earned bachelor of science and master of science degrees in computer science from Missouri S&T in 1983 and 1989, respectively, grew up with the university as a part of her life. Her father, Dr. Don Sparlin, professor emeritus of physics, has worked at the university for several decades.

“Throughout her tenure at S&T, Meg has consistently set the standard for commitment to our campus mission,” wrote another colleague. “She is known as an innovator and excellent communicator who genuinely cares about the success of those around her and the future of women in academia and industry.”

“Meg is an advocate for mentoring – both seeking the right mentor and being one to others,” wrote another colleague. “She values the opportunity to share the wisdom and experience she has gained to help other women build a path through their careers.”

Brady says her leadership style is “one that celebrates the people ‘on the ground’ doing the work.” She says she strives to ensure her employees – many of whom she says work in the background – know how important their work is and that the tasks they do every day lead to larger outcomes from faculty and students.