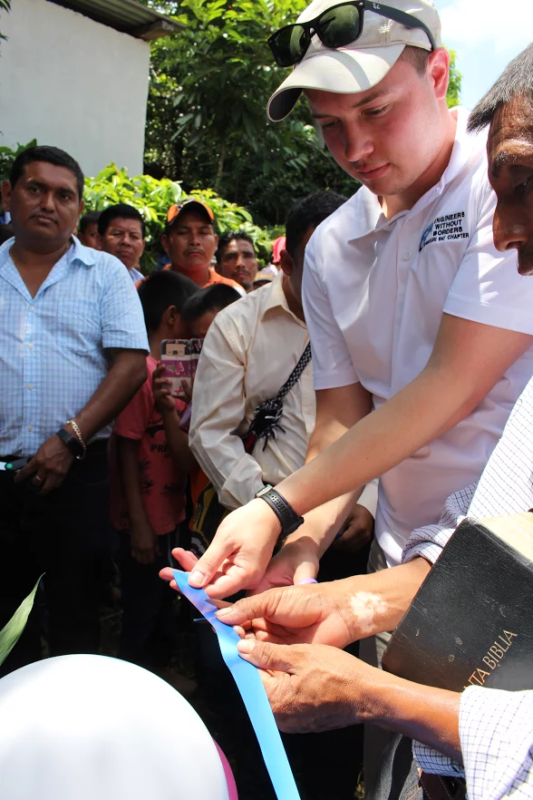 A past EWB team member dedicating the Nahualate well.

The student chapter of Engineers Without Borders (EWB) at Missouri University of Science and Technology will travel to Nahualate, Guatemala, this December to complete its 10-year effort to provide clean drinking water to the community. This past August, the team finished one of the largest EWB projects in the organization’s history: a distribution system that includes a 430-foot well, 15,000-gallon storage tank, chlorination system and 8 miles of distribution pipe.

This trip is the final part of the Nahualate project, which the team has worked on since 2008. The water system now services over 500 homes with clean water. While there, the team will perform final inspections of the system and recommend maintenance and operations to the community.

“Many donors have ensured that Nahualate will have clean drinking water for the foreseeable future,” says Chadburn Barton, a junior in civil engineering from St. Louis. Barton credits support from Boeing and the Salvador Foundation as being especially helpful for this project. “Both the community and the Missouri S&T chapter are forever thankful for all the sponsors’ support.”

While in Guatemala, the team will visit its new partner, the community of Paraje Xecaxjoj. This new community has expressed a need for a school for its children. The project will include a rainwater diversion system and a school building for K-6th grade, complete with a kitchen. During December, the team will collect information to design the school, such as topographical surveys and soil strength and consistency data.

The following Missouri S&T students will travel to Nahualate:

Chadburn Barton, a junior in civil engineering from St. Louis

Brandon Ochterbeck, a junior in chemical engineering from Fenton, Missouri

Nicholas Schmidt, a sophomore in chemical engineering from Union, Missouri

Elysia Sparks, a junior in chemical engineering from Rolla, Missouri.